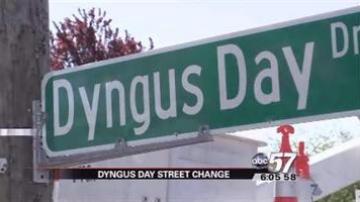 Just like sausage and beet, it's an annual tradition in South Bend.

The mayor said it feels good to enjoy the celebration as a mayor, instead of a candidate like he was last year.

Buttigieg said, "It's a great honor to be able to preside this way and I'm not going to lie, it's kind of nice to have other folks worrying about getting elected and I can just try to support them and enjoy the day rather than having an election to worry about this year."

The Dyngus say sign wasn't the only street change in South Bend, on Monday.

The tradition started in 1971, with the idea to unite all races. The mayor revealed Western Avenue as Solidarity day drive.

Garnett Keeys, an exalted ruler at Elks Lodge #298 said, "This way it brings, spring will bring both Solidarity and Dyngus Day together and make it seem like one big day of just enjoying each other and socializing."

To celebrate, the Elks Lodge had a party with plenty of ribs, chicken and sausage.