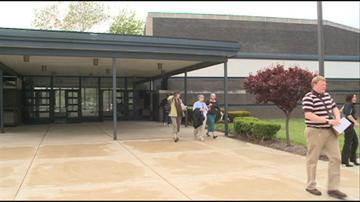 SOUTH BEND, Ind. – Hundreds of South Bend teachers crowded into the auditorium at the Jackson Intermediate Center to hear how exactly they’ll be evaluated when the South Bend Community School Corporation begins laying off teachers to help make $15-million in budget cuts over the next two years.

The National Education Association of South Bend held Tuesday afternoon’s meeting to brief teachers on reduction in force procedures and to explain how many teaching jobs will likely be eliminated.  The budget reduction plan approved by the South Bend Community School Corporation Board of Trustees calls for cutting 96 teaching positions throughout the corporation, but people at the meeting were optimistic that most of the layoffs would come as a result of retirements and not firings.

"Right now I know for sure we have 58 to 60 retirements,” explained Jason Zook, President of the National Education Association of South Bend.  “So we're not that far away."

The meeting was also held to update teachers, administrators and other school staff about the procedures for reduction in force that have been changed by state law.  Under new guidelines tenure is no longer the primary factor in determining who will lost their job.  Teachers will be evaluated based on their licensing and certification, whether they're highly qualified, if they have specialized training, job performance and finally seniority.

"I think it's very fair, with the situation as it is in teaching now a days I think we came out very well,” said Beverlie Beck, who has been a teacher for over 56-years.  “I think it'll work."

The reduction in force process is, unfortunately, familiar for South Bend teachers.  The school corporation has had to cut jobs for the past three years.  Though the mood at Tuesday’s meeting seemed to be calm, there were many worried about an uncertain future.

“The biggest question is numbers, what will enrollment be in the fall?” explained Jason Zook.  “That’s of course looming over us.”

According to documents handed out at the meeting, moving forward the corporation will conduct reviews to determine which positions can be cut.  Teachers whose positions are eliminated will have the option of applying for open jobs.  The deadline for a final decision on which positions to cut is July 1.