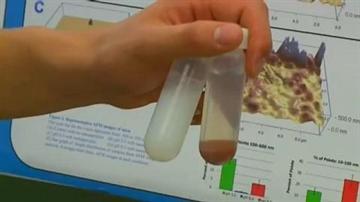 SOUTH BEND, Ind. – A South Bend student, who has devised a way to eliminate nearly all of a potentially toxic material from our drinking water, has once again been recognized for his brilliant research.

At 18 years old Eric Fein is one of just 40 young men and women from across the country to be selected as a finalist for the Intel Science Talent Search.

The competition is a prestigious gathering of the best and brightest in math and science, but Fein’s family is no stranger to it. Two years ago, Fein’s sister was selected as a finalist.

It was during his visit to that competition he says he found his calling.

Fein has spent hundreds of hours researching and developing a technique that has proven to remove 98 percent of a material called titanium dioxide out of ground water.

Titanium dioxide can be found in all kinds of materials, and is used heavily in white paint and sunscreen.

Titanium dioxide nano-particles are currently being studied for their potential harmful effects; a UCLA study from 2009 indicates the nano-particles caused genetic damage in mice.

When these nano-particles find their way into ground water they can potentially be ingested.

Fein’s experiment was to find out if he could clean the problem up.

Through the first two phases of his experiment he was able to prove he could make the nano-particles stick to iron oxide coated sand.

For this, he was awarded second place for his work at the Intel International Science Fair last year.

But Fein didn’t stop there. He wanted to know if he could consistently clean up the problem on a large scale efficiently and cost effectively.

The third phase of his experiment proved that he could do just that. According to Fein, 15 cubic feet of his special iron oxide sand could clean up nearly a kilometer of contaminated water.

He will have an opportunity to present his findings at the Intel Science Talent Search next week, and is in the running for the top prize of $100,000.

The prize money would help pay for college. Fein has been accepted to both Stanford and Yale; which may be the hardest choice he has had to make so far.

Fein wants to continue to search for ways to help people by protecting their health and the health of the environment. “To be able to look at the body of work that you’ve done, and be able to say that I’ve actually made a contribution that can be used in society [is exciting],” said Fein.