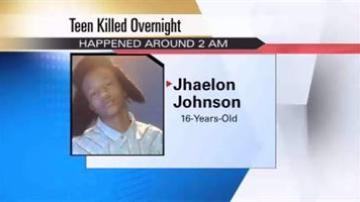 SOUTH BEND, Ind. -- A South Bend teen lost his life after he was shot to death on the city's west side early Sunday morning. Two of his teenage friends were shot as well, in what one witness tells ABC 57 News was a drive-by shooting.

The shooting happened around 1:40 a.m. near the 1300 block of Washington Street. ABC 57 has learned that South Bend Police were looking into the possibility that this shooting was in retaliation for a shooting that was called into dispatch at 11:58 p.m. That shooting happened near the corner of Brookfield Street and Vassar Avenue where Brendan Leyba, a 16-year-old Clay High School junior was shot in the leg.

Metro Homicide has since taken over the investigation after one of the three teenage boys died from his injuries at the crime scene. Metro Homicide has not released any of the victims names, however ABC 57 has learned the boy's name is Jhaelon Johnson.

Several of his friends stopped by the scene of the crime Sunday afternoon. They shared with ABC 57 his name and his Facebook profile picture. They told us he was 15-years-old and attended Washington High school this year, and went to Adams high School last year.

Police officers who first responded to the scene said a group of approximately eight teens were walking on the north side of the 1300 Block of Washington Street when a car drove by and started shooting.

South Bend's dispatch center got 911 calls coming in around 1:40 stating the drive-by car was a silver 4-door.

Tim Corbet the Commander of St. Joseph County's Metro Homicide Unit confirmed all three victims are teenagers. He said the are working hard to piecing together what happened and who's responsible for this early morning shooting. He said they are still conducting witness interviews and he expected he would be free sometime throughout the day tomorrow to put out a press release with updated information on this situation.

A South Bend Police source working the case last night told ABC 57 that the two other boys who were both shot each once in the leg were found a few blocks down the street at an housing complex.

Neighbors who would not go on camera tell ABC 57 the victim's body was still on the sidewalk area where he had been shot and killed until the sun came up around 6am. They also said investigators put large numbers next to the shell casings that were visable on the pavement.

Tony Trinca lives a street over from where the shooting occured and hear eight to nice gunshots ring out in his neighborhood. He said, "I just rolled over and went to sleep, that kind of stuff goes on pretty regular in the neighborhood, so it doesn't really bother me a lot."