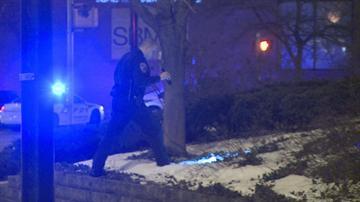 SOUTH BEND, Ind. – A day of celebrating the life of Martin Luther King Jr. ended on a sad note after a shooting left a 16-year-old boy wounded outside of a celebration in South Bend.

At 5:30 an event for local youth honoring Dr. King had just ended at the Century Center downtown.  According to officers on scene, the South Bend Police Department received a tip that somebody at the event was carrying a gun.  When officers approached a teen matching the description the teen allegedly attempted to pull a gun from his coat and accidently shot himself in the arm.

“We do have a young male individual, approximately 16-years of age, has suffered from a superficial gunshot wound to the left arm,” explained South Bend Police Division Chief Gary Horvath.

Officers took the teen into custody, his wound was minor and non-life threatening.  Officers found a pistol in bushes lining the outside of the College Football Hall of Fame.

Nobody else was hurt in the shooting, though many were shocked that violence had erupted outside an event meant to inspire peace.

“This was the termination of a full day-long Martin Luther King event that area youth participate in each and every year,” Horvath explained.  “Traditionally it’s very, very peaceful and this is completely out of the norm.”

Witnesses on scene described the scene as chaotic.

“At least a dozen cops flew down this road,” described Jeff Roberts, who was at work on Washington Street across from the scene.  “There were fire trucks everywhere, sirens coming from every which direction, we really didn’t know what was going on.”

Many on scene were left wondering why anyone would bring a gun to an event celebrating the life of Martin Luther King, Jr?

“I don’t understand how that would be a logical thing in somebody’s head to actually go to a rally supporting Martin Luther King and bring a gun,” Jeff Roberts explained.  “All the man ever stood for was peace, it just seems pretty ridiculous to me.”

Police said they weren’t completely sure that the teen who was shot was the same person who’d been reported as having a gun at the event, but said it was likely given that the teen matched the description and was armed.