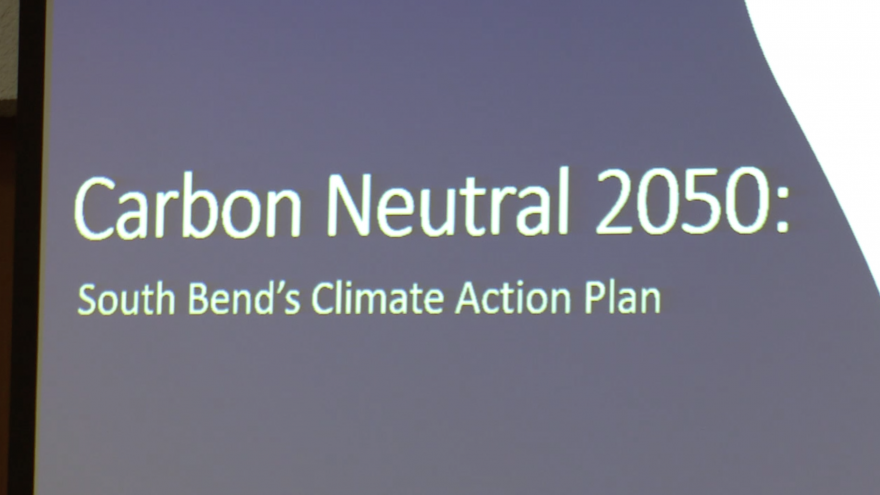 SOUTH BEND, Ind. — Climate change was at the center of a South Bend Common Council committee meeting on Monday.

This November, the city rolled out an aggressive climate action plan that looks to make the city completely carbon neutral by 2050.

“It is an intimidating amount of work to do,” said Therese Dorau, the city’s director of sustainability. “But the reality is I guess on the negative side we are in a climate crisis and we need to act now.”

According to the 40-page plan, South Bend along with other Hoosier cities have already felt the impact of climate change with red flags like rises in temperatures and extreme weather events. City data shows energy and transportation are causing an increase in emissions.

If the council approves the plan, Dorau said people could see changes starting 2025.

But young people in the city, who were armed with signs and songs, said more needs to be done.

“We know this plan is in draft form and a lot of it is doing really good things but it does not meet the ambition that we need,” said Garrett Blad, a local climate activist.

Blad and a group of about 20 students at the County-City Building on Monday said the current plan needs to be more ambitious, concrete, and comprehensive.

“We know this plan leaves out significant chunks of what is needed to get there,” said Blad.

In 2017, South Bend Mayor Pete Buttigieg signed an agreement called “We Are Still In,” after President Donald Trump announced the country would withdraw from the Paris Agreement, a global effort to reduce emissions.

“We should definitely always keep

Pushing the envelope and keep looking for new ways to innovate and move faster,” said Dorau.