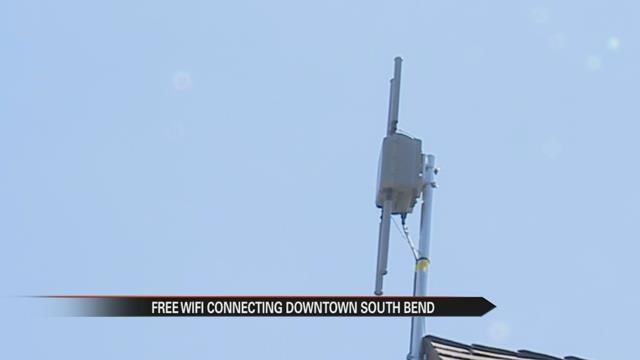 It covers a portion of the downtown area with 30 hotspots.

Shannon Strang already used during a day at Seitz Park.

“We were surprised when we got over here to see that the hot spot was actually working,” Strang said.

Strang was about 100 feet from the closest hot spot, atop the East Race gazebo.

Project leaders say it’s weather resistant and can provide access to thousands of users at one time.

“You can stream. You can do homework. You can just go about it and do whatever you need to do,” Santiago Garces, chief innovation officer for South Bend said.

Mayor Pete Buttigieg says lofty donations and contributions got them this far, and if it goes well downtown, they’ll look to expand further into the city.

“We do want to expand it. So we’ll be looking at things like other housing authority sites, maybe rec centers, parks, schools,” Buttigieg said.

While the free network is a convenience for some, Buttigieg says it’s a necessity for others.

"Whether you’re a traveling consultant staying at the Double Tree, or a low income teenager a the housing authority, you’re on an equal footing now. You’ve got access to Wi-Fi,” Buttigieg said.

Donors and fundraisers collected the more than $300,000 to set up the initial system.

The city will pay for upkeep.