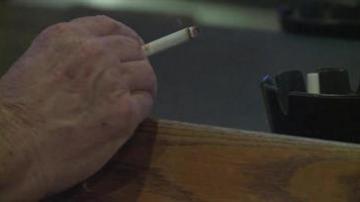 SOUTH BEND, Ind. -- Between now and July, South Bend is hoping Mishawaka and St. Joseph County will join them in a smoking ban. If they all agreed, all the bars in the county would be smoke-free and that would put them all on a level playing field.

"They'll bring up 5-6 doctors and tell us about the evils of smoking. We smokers know that. We know what the evils are and we still choose to do it," said Matthew Zultanski.

He says it's putting his entire business-and livelihood in jeopardy.

He estimates that 40 percent of their customers will just head to nearby bars - in the county or in Mishawaka -if they can't smoke here.

Zultanski says smoking shouldn't be up to the government, but up to the individual.

"If they do great. If they don't want to because it's too smoky then they have that right. Like I have the right to allow smoking in here," said Zultanski.

That opinion was echoed at the packed common council meeting Monday night.

Ultimately the vote never happened and now South Bend leaders hope Mishawaka and St. Joseph County will join them in a smoking ban so no business is left out.

"It's like little kids on the edge of a pier and they don't want to jump in the water because it's cold but they are wondering who is going to go first. Here Mishawaka is looking at South Bend and South Bend is looking at the county," said Mike Hamann, St. Joseph County Council.

Hamann says if South Bend does pass the ban, he understands that smokers may take their business elsewhere.

Mike Hamann, St. Joseph County Council district A: "It is possible that folks who smoke may avoid those south bend bars and go a few blocks into a bar in the county an unincorporated area and give their business to that place. I understand that argument and it make sense."

What doesn't make sense to Hamann is how a room full of veterans could be told to put down a legal drug-whether that's in the city or the county.

"I mean I don't understand that you can ask a guy to lay his life on the line in Korea, Vietnam, Afghanistan, Iraq and then tell him he can't smoke in his private club. It didn't make sense to me," said Hamann.

The president of the St Joseph County Council says he plans on meeting with officials in South Bend and Mishawaka to further discuss the issues associated with the smoking ban before the vote in July.