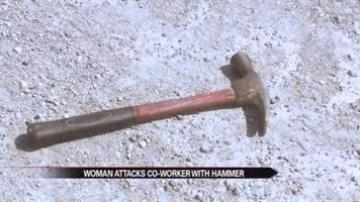 According to the police report, she struck him in the head, and when he tried to get away, she continued to hit him repeatedly.

We learned this isn't the first time 44-year-old Kruszynski has been arrested.

Captain Phil Trent with the South Bend Police Department said, "apparently, two coworkers got into a disagreement and a female co-worker hit a male co-worker in the head with what's been described as a hammer. We have since collected that object, and in speaking with a witness, another co-worker collaborated our victim's story."

Detectives are still piecing together what happened before the attack, but Kruszynski was arrested and is currently being held in the St. Joseph County Jail on a felony battery charge.