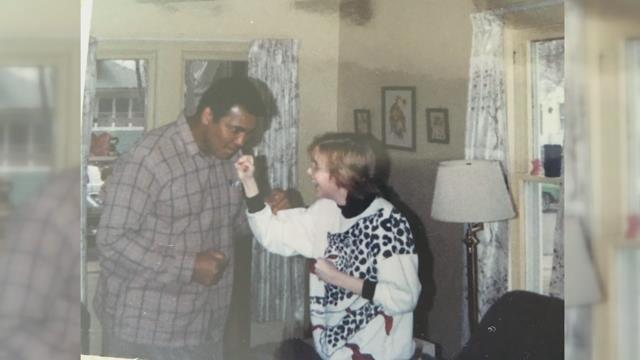 On Friday Muhammad Ali was laid to rest in Louisville Kentucky. A woman from South Bend remembers the time she spent with the legend on the same say as his funeral.

Ali visited Edith Leemreis during a time she was fighting her own battle.

Leemreis remembers the smallest details even 26 years after meeting the champ.

“It was cool because that was the last person I thought would be standing in my living room,” says Leemreis.

Flipping through Leemreis’s scrap book brings back both happy and sad memories.

In February of 1990 Muhammad Ali paid a surprise visit to then 19-year-old Leemreis.

“He was pretty severing at his time so I couldn’t really understand him but his entourage helped me through what he was saying,” says Leemreis.

Leemreis was not in good health either.

“That was before the cancer,” says Leemreis.

She is describing a picture that shows a big difference in her appearance before being diagnosed with brain cancer.

Leemreis was a part of Make a Wish Foundation, and Ali learned of her story.

In February 1990 he showed up at her door step.

“He wasn’t here for a photo op. He was here because he cared,” says Leemreis.

Leemreis says the brash persona Ali portrayed on television was not the same man she met on that winter day.

“His skin for a boxer was just gorgeous I mean I didn’t see any scars on him and he was just so nice,” says Leemreis.

Ali and Leemreis spent about an hour together and she says that was enough to be hit hard by his death.

“I was devastated, you knew he was sick and you knew it was coming,” says Leemreis.

On Friday the world said goodbye to Ali during his funeral ceremony.

Leemreis paid her respects from her living room.

“He was really sincere in everything he said,” says Leemreis.

Now Leemreis holds onto pictures of two fighters, one a world champion boxer and the other a South Bend cancer survivor.

“If someone was going to survive cancer, yea that would be me,” says Leemreis.