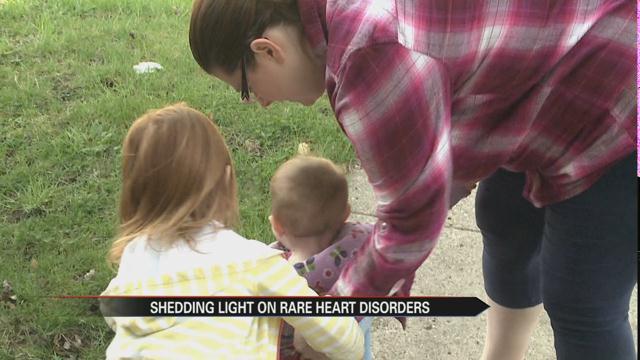 According to the National Heart, Lung, and Blood Institute only about one in 7,000 Americans inherit the heart condition called Long QT syndrome, also referred to as LQTS.

However, that number may not be completely accurate because a lot of times this condition goes undiagnosed, as was the case for South Bend resident Cally Baker.

It was just like any other day when her underlying condition sent her to the hospital.

"We were sleeping and my daughter came in and asked for some cereal like she normally does, only this time it was a little bit different. My heart started racing. My husband called 911 and then shortly after that my heart actually stopped," said Baker.

The incident happened in Dec. 2013 and left the 24-year-old mother of two girls and a step-son in the hospital for about 10 days and terrified her husband Jeremy.

“She sat there for about two minutes basically lifeless. I couldn't do anything. I didn't know a whole lot about what was going on, other than to keep her head from hitting the floor,” said Jeremy Baker.

"I was in a medically induced coma in the ICU for several days. At about day three they brought my husband in to ask me some questions. One of the questions he had to ask me was if I remembered my girls, and I didn't, which as a mom is really tough, you never want to say you forgot your kids,” she said.

After a series of tests and coding several times in the hospital, doctors diagnosed her with Long QT Syndrome.

“Basically what I have is a shortened, prolonged QT. It's a heart rhythm issue where basically where your natural pacemaker doesn't quite catch up to your heartbeat,” she added.

The treatment for this condition involved open heart surgery and putting in an Implantable Cardiac Defibrillator. Once she was able to go home, she still had a long road to recovery.

Doctors did not think she would improve as much as she did but she still sometimes has issues with her memory.

“Memory is the biggest thing and then sometimes I forget words. For example a cup could be sitting in front of me and I'll forget what it is. My oldest daughter has been great about helping me when that happens.”

Since Long QT syndrome goes undiagnosed a lot of times, she recommends that people get tested because it could save a life down the road.

Since it is genetic, she has already had her oldest daughter tested and she has a heart murmur.

They are still in the process of testing her youngest daughter.

Baker is now able to work and take care of her children; however, she is slowing getting back into exercise but has to be careful with overexertion.

With the Implantable Cardiac Defibrillator, she is limited from using household appliances like a microwave.

She hopes that by sharing her story, she can help someone else who may be dealing with the same condition.