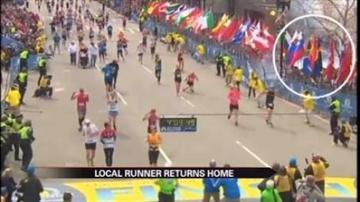 SOUTH BEND, Ind. --  It has been over 24 hours since the Boston marathon explosion and all the South Bend runners are returning home.

One of those runners almost didn’t make it home.  Lisa Smith crossed the finish line just one minute before the blast.

“As soon as I got under the arch, I heard this huge explosion,” said Smith.

First time Boston marathon runner, Smith did not know what to think when she crossed the finish line and heard a huge boom.

“I thought maybe there was construction at one of the store fronts,” said Smith. “All you could see was the smoke and debris and everything and you couldn’t see through it.”

What she did not know was that a bomb had detonated killing three people and injuring hundreds more. It was not over yet.

“There was another explosion,” said Smith.

As a nurse, her first instinct was to run back and help, but police told her to keep moving through the three mile finish.

“I was going to go that way and the people up on the arch up above on the video and everything just kept saying keep moving, keep moving, don’t panic. Everyone keep moving,” said Smith.

When Smith got back to her hotel, police shut down the city. Cell phone signals were down. Hotels were on lockdown and a mood of celebration turned to sadness.

“I was excited to be finished and then it just got real quiet and everyone was trying to get a hold of their families,” said Smith.

Finishing just one minute before the bomb went off, Smith says she is thankful to be alive and praying for the ones that did not make it.

“My heart goes out to them. It is just so sad,” said Smith.