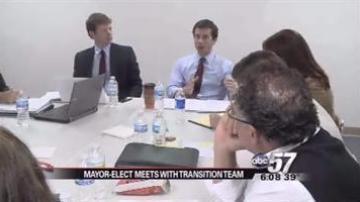 SOUTH BEND, Ind. -- South Bend Mayor-Elect Pete Buttigieg met with his Transition Team about their future plans for the city of South Bend.

ABC 57 cut right to the chase, and asked him, what do you plan to do to improve our city? Specifically, about all of the vacant homes on the west side.

Buttigieg jumped right in with a  response, and said that it was one of his priorities to set up an abandoned building task force. He added that this was one of his campaign promises, and that he intends to keep it.

"Part of it may have to do with addressing properties, but we have to think beyond demolition and really be strategic. And that can't come from any one person. It's going to be a community process, and I'm already having some initial meetings to try to put that together," said Buttigieg.

Another high-priority on Buttigieg's plate? The Chase building downtown. He said they need to find someone who is prepared to make investments the city needs.