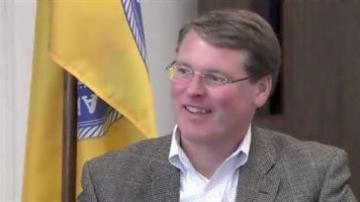 SOUTH BEND, Ind. -- Last week South Bend Mayor Pete Buttigieg announced he will be deployed to Afghanistan for several months next year. He also announced City Controller Mark Neal would fill in. Who is Neal and can he make the tough decisions a mayor needs to make?

In a one on one conversation with Neal, he made it clear the position is only temporary.

In fact, when Mayor Buttigieg returns from his deployment, Neal plans to leave public service and return to the private sector.

Neal was once the Chief Financial Officer of Press Ganey Associates.

He says he is comfortable stepping into the mayor's shoes.

“I’m comfortable. I’ve worked in executive management before, comfortable again with the vision that has been laid out, the strategies we have in place, that we’re going to continue marching on," said Neal.

Neal really means it when he says marching on. He has no plans to stray from the path Mayor Buttigieg has laid out for him.

“The mayor’s vision has been pretty clear in terms of what we are doing to make the basics easy, providing good and efficient government and really with a focus on economic development and jobs," said Neal.

But not every decision Neal will have to make is going to be basic.

With federal lawsuits looming, and the potential for a crisis to erupt at any time, he is going to have to think for himself.

"I’m confident that in terms of the priorities of the city of economic development, jobs, addressing vacant and abandoned housing, addressing customer service for citizens, looking at our smarter streets initiative, that’s going to be the focus," said Neal.

The laid back, soft spoken Neal is a stark contrast to the charismatic decisive Mayor Buttigieg.
Which leaves some wondering if even from half a world away, Mayor Pete will still be pulling the strings.

Mayor Buttigieg described Neal as a man who is not political.

Neal calls himself a moderate democrat.

According to the state of Indiana’s voting history, Neal has voted democrat most of the time, with ballots cast for republican primary races as recently as 2010.