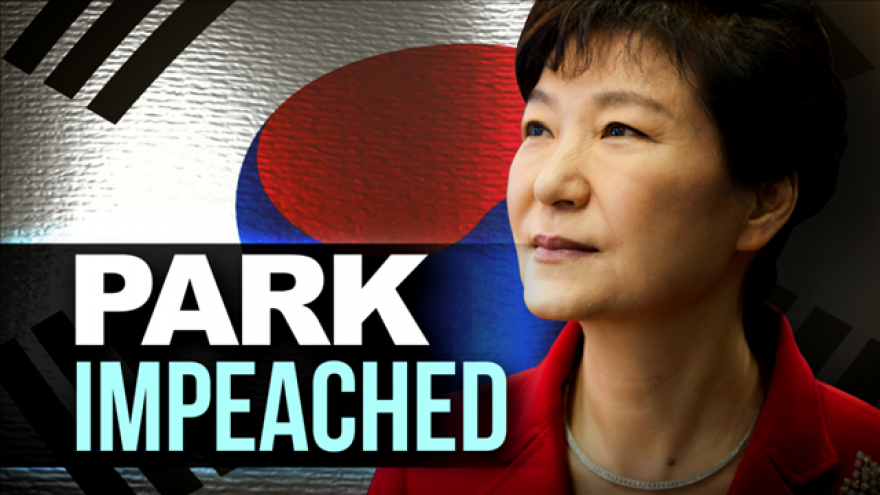 Editor's note: An earlier version of this story misspelled President Park's given name. This has since been corrected.

The decision was unanimous, with all eight judges on the court voting to remove Park, the country's first female president, from office.

Park is the first South Korean President to be impeached. An election for her replacement must be held within 60 days.

The decision was announced by Justice Lee Jung-mi in a live, national broadcast.

Police issued the "Gabho" emergency order in Seoul ahead of Friday's announcement, the highest level possible.

Officers are on standby for expected protests, with 270 units being mobilized -- about 21,000 in total.

The US, a key regional ally, responded to the decision by offering assurances that the two countries' relationship would continue uninterrupted.

"We will continue to work with Prime Minister Hwang for the remainder of his tenure as acting President, and we look forward to a productive relationship with whomever the people of South Korea elect to be their next president," acting State Department spokesman Mark Toner said.

?"The United States continues to be a steadfast ally, friend, and partner to the ROK," he said, using an acronym for South Korea's official name, the Republic of Korea.

Park's problems began in October, when revelations emerged about the influence Park's confidante and adviser Choi Soon-sil had over the President.

The court upheld the impeachment, which was enacted by South Korean lawmakers in December, because she was judged to have abused her authority in helping Choi raise donations from companies.

Choi is currently on trial for abuse of power and fraud.

In December, lawmakers voted to impeach Park by a vote of 234 to 56, stripping away her executive powers. Since then she has remained in the presidential Blue House, but has remained largely out of public view.

Local media and opposition parties have accused Choi of abusing her relationship with the president to force companies to donate millions of dollars to foundations she runs. She denies all charges against her.

Her final weeks in office were marred by huge demonstrations as hundreds of thousands of South Koreans braved the brutally cold winter temperatures to take to the streets of Seoul and call for her ouster.

In a brief televised apology however, Park made it clear that she had no intentions of resigning. In December, the National Assembly voted 234 to 56 to impeach her.