South Shore back on regular schedule 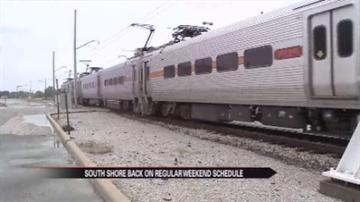 GARY, Ind. -- The South Shore is back up and running Sunday after being suspended for most of Saturday.

The train between Chicago and South Bend was temporarily shut down after an early morning accident on the I-90.

A semi-truck lost its load on the tracks just east of the Gary Metro Station.

No trains were involved but crews were called in to repair the track and overhead wires damaged by the semi.