Southwest pilot, a former Navy fighter pilot, praised for her 'nerves of steel' during emergency 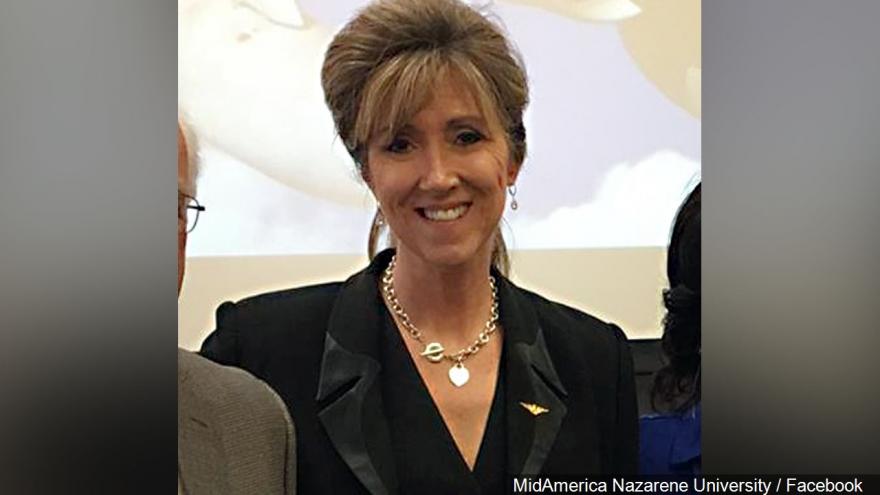 Tammie Jo Shults\' name has not been officially released by Southwest, but her alma mater and the passengers have identified her as the pilot of the Southwest Airlines flight that made an emergency landing on April 17, 2018. Photo courtesy Kevin Garber/MidAmerica Nazarene University 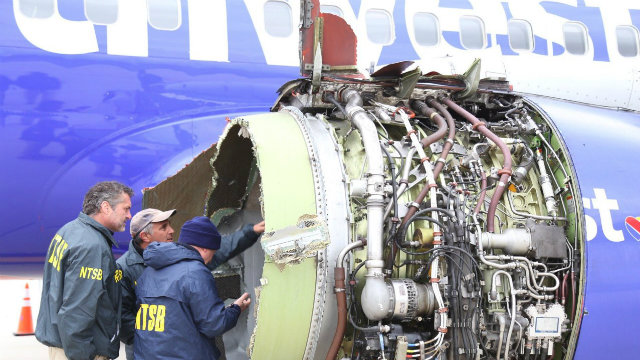 The National Transportation Safety Board is onsite inspecting a Southwest airline plane after engine failure caused the plane to make an emergency landing at Philadelphia International Airport. @NTSB_Newsroom/Twitter

(CNN) -- Things looked grim aboard the Southwest Airlines flight, but you wouldn't have guessed it hearing the air of calm from the former Navy fighter pilot guiding the plane to safety.

About 20 minutes after the flight departed from New York, passengers say they heard what sounded like explosions. Debris from an engine failure broke open a plane window. And what was most dire was a female passenger being sucked into the hole where the window had been.

With oxygen masks dangling down and passengers screaming as they struggled to save the woman, the pilot's voice conveyed none of the panic rampant aboard Southwest Flight 1380.

The way Captain Tammie Jo Shults handled the emergency has been applauded by passengers, but in a joint statement with First Officer Daren Ellisor, the captain shrugged off praise for their actions.

"We all feel we were simply doing our jobs," Shults and Ellisor said in a statement posted on the airline's social media pages. "Our hearts are heavy. On behalf of the entire crew, we appreciate the outpouring of support from the public and our coworkers as we all reflect on one family's profound loss."

The pilots said they had been interviewed by investigators Wednesday and would not be doing any media interviews.

Shults' swift response won't likely surprise those who served with her when she joined the Navy in 1985, two years after earning her bachelor's degree in biology and agribusiness from MidAmerica Nazarene University in Olathe, Kansas.

As one of the Navy's first female fighter pilots, she served in VAQ-34, a tactical electronic warfare squadron out of Point Mugu, California, that helped train ship crews to respond to Soviet missile threats, according to Navy records.

Shults was among the "first cohort of women pilots to transition to tactical aircraft," said Lt. Christina Helenaleka Sears, a Navy spokeswoman.

She later was an instructor for the EA-6B Prowler, an electronic warfare plane that counts jamming radar systems and gathering radio intelligence among its responsibilities, and for the F/A-18, a carrier-capable combat jet, the records show.

After transferring to the reserves from 1993 to 2001, she retired as a lieutenant commander with two Navy Marine Corps Achievement Medals and a National Defense Service Medal. She was also a pistol marksman, according to records.

In air traffic control audio, Shults spoke calmly and slowly, describing the emergency unfolding more than 30,000 feet in the air -- all the while trying to land a plane with engine failure.

"We have a part of the aircraft missing," she told air traffic control.

Speaking briefly about the emergency landing the plane would have to make in Philadelphia, she asked matter-of-factly: "Could you have the medical meet us there on the runway as well? We've got injured passengers."

"No, it's not on fire," she replied. "But part of it is missing. They said there's a hole and that someone went out."

The controller responded: "Um, I'm sorry. You said there was a hole and somebody went out? Southwest 1380 it doesn't matter we will work it out there."

The plane went from an altitude of 31,684 feet to about 10,000 feet in a little more than five minutes, according to data from Flightradar24.com.

The plane descended precipitously, passenger Kristopher Johnson said, but the pilot "regained control" and informed passengers the flight was headed to Philadelphia.

It was a rough landing, he said, and things were so chaotic he wasn't sure if the plane was going to crash.

"It was just all incredibly traumatic, and finally when we ... came to a halt, of course, the entire crowd was (in) tears and people crying and we were just thankful to be alive," Martinez said.

Passenger Kathy Farnan said crew members knew what they were doing and kept everyone calm.

"The pilot was a veteran of the Navy," Farnan told CNN. "She was very good."

When it was all over, the pilot came out of the cabin and hugged everyone, telling them, "You all did a great job. You did a very good job," passenger Amy Serafini said.

'That lady, I applaud her'

They not only praised her technical skills but her professionalism as well. 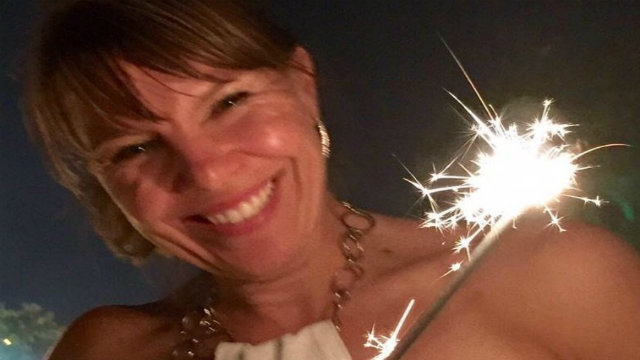 Jennifer Riordan, has been identified as the victim in Tuesday's deadly incident aboard Southwest Airlines Flight #1380. The Riordan Family

Passengers told CNN affiliate WPVI that the pilot walked through the aisle and talked with them to make sure they were all right.

Passenger Alfred Tumlinson told WPVI: "She has nerves of steel. That lady, I applaud her. I'm going to send her a Christmas card, I'm going to tell you that, with a gift certificate for getting me on the ground. She was awesome."

Johnson posted a picture of the shredded engine and thanked crew members, calling them #angelsinthesky.

He also tweeted a photo of the crew. "We lost an engine mid-flight and they guided back to Philly."

Jennifer Riordan, the female passenger, whom witnesses said was pulled back in from the broken plane window, died at a Philadelphia hospital, authorities said. Seven others were treated for minor injuries.

The plane had departed from New York, bound for Dallas.