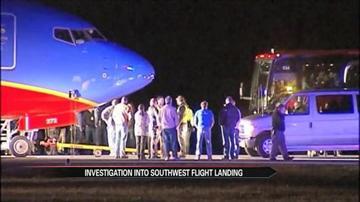 BRANSON, Mo. — The Southwest Airlines flight that landed at the wrong airport on Sunday took off from Missouri on Monday evening after a thorough inspection.

The FAA and the NTSB have launched an investigation into how the flight landed at the wrong airport.

Two veteran pilots were at the controls Sunday night but some are calling that landing a rookie mistake.

The plane had over 100 passengers on board when it ran out of runway as it landed, stopping just 300 feet from a steep embankment.

Passengers on the plane said the landing was rough and burnt rubber could be smelled from inside the plane.

The runway was half the length of what is should have been if they had landed at the correct airport.

The pilots on board are currently on paid leave pending the investigation.