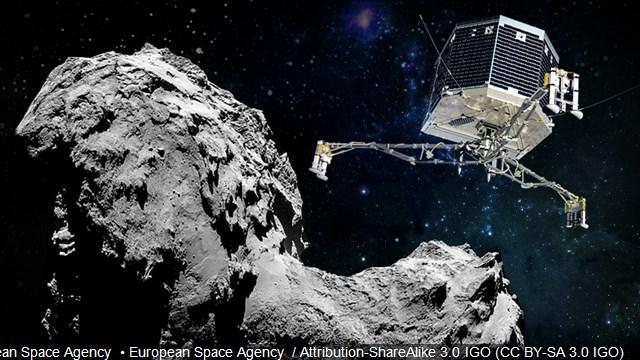 By Elizabeth Roberts for CNN

(CNN) -- Philae, the little space robot that has captured hearts around the world, was thought to be forever lost.

But delighted scientists announced Sunday that the European Space Agency's comet lander has come back from the cosmic dead.

New images downloaded from the Rosetta probe in orbit around the awkwardly named Comet67P/Churyumov-Gerasimenko show the long-lost Philae wedged in a crack between some rocks. Rosetta captured the images in the nick of time, as its mission is ending in less than a month.

"THE SEARCH IS OVER! I've found @Philae2014!!" announced the Rosetta Mission team on Twitter.

The discovery is the latest twist in an amazing space odyssey.

In November 2014, Philae completed a spectacular landing on the frozen surface of the comet, despite a harpoon system that did not function after its 10-year journey through space.

The lander hopped across the comet's surface, and as people across the globe watched its progress, engineers and scientists announced that Philae was communicating with its ground stations, some 317 million miles (510 million kilometers) away on Earth.

Google dedicated its search page to the lander, and instead of the second letter O in its logo, depicted Philae extending its three legs.

Scientists carried out over 60 hours of research with Philae's instruments, acquiring images, sensing molecules and attempting to hammer the unexpectedly hard surface of the comet.

Among the invaluable scientific data gathered was the dramatic discovery of 16 "carbon and nitrogen-rich" organic compounds, supporting the theory that the building blocks of life could have been brought to Earth by comets.

But then the intrepid little probe ran out of juice. Unable to get the energy it needed from the sun to power its solar panels, its battery went flat and it fell into hibernation mode.

As the comet came closer to the Sun in June and July 2015, the lander briefly revived and communicated once again.

When once again it fell silent, it was assumed Philae had stopped functioning due to the extremely cold environment. The three-legged probe even sent a heartbreaking farewell tweet in July.

"Unfortunately, the probability of Philae re-establishing contact with our team at the DLR Lander Control Center is almost zero, and we will no longer be sending any commands," Stephan Ulamec, Philae project manager, announced in February this year. "It would be very surprising if we received a signal now."

Philae seemed to be doomed to life lost and alone traveling through the solar system.

But when analysis was completed of the latest pictures from Rosetta's Osiris camera, which were downlinked to Earth on Sunday night, there came a delightful surprise.

The photos show Philae wedged in a shadowy crack, with its boxy, one-meter-wide body and two of its three legs clearly visible.

There has been an outpouring of delight at the remarkable news.

"With only a month left of the Rosetta mission, we are so happy to have finally imaged Philae, and to see it in such amazing detail," said Cecilia Tubiana of the Osiris camera team.

Patrick Martin, ESA's Rosetta Mission Manager, said: "This remarkable discovery comes at the end of a long, painstaking search. We were beginning to think that Philae would remain lost forever. It is incredible we have captured this at the final hour."

Although there is no hope of reviving the lander, knowing exactly where it is resting will help scientists make better sense of the data it returned during its three days of operation back in 2014.

Matt Taylor, ESA's Rosetta project scientist added: "This wonderful news means that we now have the missing 'ground-truth' information needed to put Philae's three days of science into proper context, now that we know where that ground actually is."

The discovery comes just a few weeks before the European Space Agency plans to crash Rosetta on the comet Sept 30 to bring its 12-year mission to an end.

"Now that the lander search is finished we feel ready for Rosetta's landing, and look forward to capturing even closer images of Rosetta's touchdown site," said Holger Sierks, principal investigator of the Osiris camera.