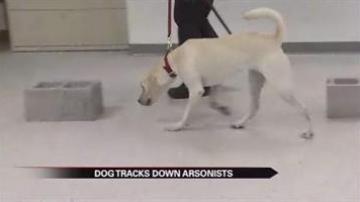 Michiana has a new dog in town that will sniff out clues in arson investigations. Before, fire officials had to call for a special canine that was over two hours away. Now, Southwest Central Fire Territory has its own.

The new dog will check out any suspicious fires within a 200 mile radius.

Francesco’s Restaurant erupted in flames one early morning back in February.

Investigators knew the fire was suspicious, but crews had to call in an arson dog that was all the way in Anderson.

After intense training, Operations Chief Anita Shultz is one of only nine female arson dog handlers in the country.

“Investigators have to look with their eyes and determine where that fire may have started. Then they have to dig through everything,” said Shultz.

Sadie, a 16-month old lab mix, can sniff out 15 different kinds of accelerants - and fast.

“She has 220 million receptors in her nose. An eighth of her brain is used for sniffing. So she can find those accelerants almost immediately,” said Shultz.

She sniffed out bricks with burnt carpet, carpet padding, and wood inside.

When she finds an accelerant on a scene she sits – and then she gets a treat.

Sadie can also find the fire-starter in a big crowd of people by sniffing out their shoes and clothing.

So with suspicious flames destroying buildings like Francesco’s, Shultz wants her investigating partner by her side to find out exactly what sparked the fire.

“I hope to be busy. She needs to work and she loves to work. And so I'm hoping that we'll be called often,” said Shultz.

She trained with Sadie out in Maine every day straight for 5 intense weeks. Only 10 teams get chosen every year.