Special Report: We the People 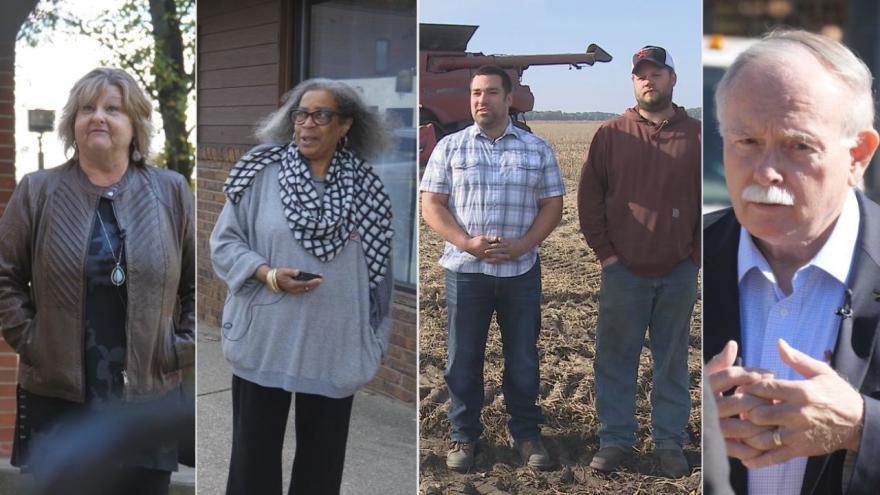 Voters here at home are taking center stage just days ahead of what many are calling the most important midterms ever.

Many of them say they’re keeping an eye on healthcare.

It’s one of the hottest topics in the 2018 midterms according to the latest Rasmussen poll. The poll found 87 percent of likely voters out of the 1,000 surveyed across the country believe it’s important to their vote.

In Elkhart, voter Patricia Osborne says it’s one of her biggest struggles.

Osborne is retired and makes supplemental income by selling goods at an antique shop in town. She says she has to go without an EpiPen because she simply can’t afford it.

Larry Gurthet, an early voter in Plymouth, said that’s what drove him to the polls.

“I don’t want to vote for people who tell me they’re going to cut social security, Medicare, Medicaid, I mean, those things should be expanded,” he said.

Gurthet is a retired bus driver and he believes those things directly impact him.

“I paid for social security and Medicare all my working life. I don’t want to see it changed. It works well.”

Republicans in Congress voted to repeal the Affordable Care Act 70 times. The last effort sponsored by Senators Lindsey Graham and Bill Cassidy, failed to pass the Senate in September.

In Rochester, ABC 57 News found a few seniors citizens at Tweedle Dee Diner talking about healthcare. Toby Seiler Jr. and Fearol Baxter say they want to see less partisan politics when it comes to the issue because i’'s a matter of life or death for them.

In Niles, Joyce Bashara, the owner of Brew Ha Ha Cafe Shop, believes this issue is stopping her small business from growing.

“I’d like to be able offer benefits and have a staff but I can’t do that,” said Bashara. “My daughter is a great example, I’d hire her in a heartbeat but she needs insurance.”

These voters say these are real consequences they want their candidates to focus on instead of their political fights over the issue.

Voters are also taking a hard look at incivility in politics ahead of the 2018 midterm elections.

“My parents had a business and they said never talk about religion sex or politics or money and I try to follow that pretty much, especially nowadays, you know, it’s really kind of a battle zone with politics so I just try to avoid it,” said Bashara. “But sometimes I can’t be too quiet.”

It’s a tough topic to tackle, especially with strangers.

“Well of all the times we need to have people come together and talk about tough issues and hear what’s going on,” said Evans.

Because some voters believe the thin line between partisan debate and hostility is blurring more with each election.

“Where people are urged to hurt their politicians, to hurt people in a restaurant that is so wrong,” said Elkhart voter Patrick Hopman. “That is so wrong.”

Hopman is the owner of Black Crow on Main, an antique shop in the heart of downtown Elkhart. He believes when it comes to politics, people are pulling no punches these days. He says it’s a far cry from disagreements he remembered back in the day.

“Friendly disagree with me,” he said. “That’s what life is about. Becoming better people and learning how to live with everyone.”

Many Michiana voters think more people are starting to unlearn how to live with everyone.

Those conversations are seemingly becoming more common. The question of respect in politics was invoked last week when high-profile Democrats and critics of President Donald Trump were the targets of failed mail bombing attempts.

A few folks in Marshall County are looking for the president to be that leader. Betty Wakefield is one of those people. She’s a Democrat in the predominantly conservative county that Trump won by about 68 percent of the vote in 2016.

“I’ve been angry with friends because they say such horrible things about one another,” said Wakefield. “They say it about President Obama, whoever’s a Democrat, they say nasty dirty things and they post horrible pictures about them and I just hope we can get back to being one country.”

Her hope, like many other Hoosiers, is for a return to civil discourse.

While Indiana is known as the Crossroads of America, some folks living here say it seems more like flyover country to lawmakers in D.C.

“I’m hoping that the next generation is, well obviously they are, they’ve been wanting their voices heard,” said Bonnie Brown, Lagrange County clerk.

Brown is one of quite a few registered voters in Lagrange who are hoping activism among Indiana’s youth will put more eyes on the state again. “We noticed a lot of younger aged people turning out, more so, so that’s inspiring,” said Brown.

This community is one of many Hoosier towns that felt folks in Washington weren’t working on its time. But Brown believes times are changing.

In 2016, Lagrange saw one of the highest voter turnout in the state. 71 percent of registered voters in the county participated in the election. Only two other counties matched that. The statewide average was 58 percent that year. It’s also big jump for the county from 60 percent in both 2012 and 2008 elections.

“Those numbers say to me that America’s ready for a change, not the same old political arena,” said Brown. “Lagrange is ready too. And I think it inspires me more because of Vice President Pence. It’s like ‘OK, we’ve got one of our own up there and he’s going to look out for us.”

The county is expecting a larger than normal midterm turn out because of that excitement, while others aren’t expecting much from Washington.

“It seems like during politicking season, close to election time you’ll see people more,” said farmer Joshua Lawrence. “A lot of the time it’s their aids that come out but we’d definitely like to spend more time talking to them more.”

“You look at some of the rules and regulations and some of them don’t make sense,” said farmer Matt Lawrence.

There is one policy in particular that is shaking up Indiana’s agricultural industry, especially for the corn and soybean farmers at Lawrence Farms in Knox.

“The biggest issue that everyone in the farming industry is talking about: since there’s been this tariff back and forth, soy beans have gone down almost $2 a bushel,” said Joshua. “So that’s very real to us.”

It’s real to them just like folks in the manufacturing industry in Elkhart are starting to feel the pinch because of steel tariffs. Dave Evans, the owner of Evans Metals since the 1970s, says the market has become volatile and will end up hurting his customers more so than his company.

“We will typically give an estimate, and then an owner or client will decide to get something from us and that’ll be sixty days from now and the price of aluminum will skyrocket and so could stainless steel,” said Evans.

But Evans suspects there are more communities that feel left out too.

A few folks in Southwest Michigan agree. While Cassopolis might have political spirit, oftentimes politicians running for big seats usually connect with voters here only in spirit.

ABC 57 News asked one voter when was the last time a big name in politics has been the town.

“I don’t remember,” said voter Clara Lee. “I remember years ago in the 90s bush came here from Niles to get to Kalamazoo, but other than that.”

Clara, now a retired state employee, volunteers at the local Democratic Party headquarters. She says she’s hopeful. She believes the folks they send away to Washington can learn a lesson from a community like hers.

“Love the people and tell them the truth,” said Lee. “If you say you’re going to do something for them, do it because we depend on your promises.”