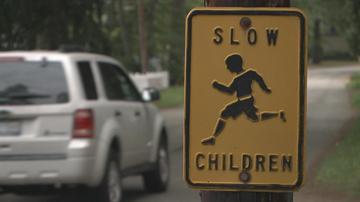 To comply with a Michigan state law passed 2006, the Cass County Road Commission removed 140 25 mph speed limit signs and temporarily the legal speed on those roads is 55 mph.

“You would be amazed that nobody’s gotten hurt,” said Earl Lintner of Garrett Drive in Silver Creek Township. Lintner is the President of the Dewey Lake Property Owners Association. Garrett Drive runs along the East edge of Dewey Lake and lost its 25 mph signs earlier this summer.

“A speed limit of 55 mph is just ridiculous,” said Lintner. He said dozens of children cross the road to access the lake. Garrett Drive is a designated bike path and is used constantly by pedestrians. “People are very upset.”

Michigan State Police Sergeant Jim Campbell told ABC 57 News Wednesday the law requires residential 25 mph signs to be reformulated using an 85th percentile method. The method clocks the speed of drivers along a road and a new speed limit is decided using a formula where 85% of drivers fall under the limit.

Cass County Road Commission Interim Manager Chris Bolt told ABC 57 News Wednesday Cass County assumed the law would revert in the legislature so the road commission put off the new studies. Bolt said 25 mph speed limits on the roads in question could not legally be enforced by police.

“The formula in this case needs to be altered,” said Bruce Nevins, owner of Shady Shores Resort along Garrett Drive. Nevins thinks using the 85th percentile method will not accurately gauge a proper speed limit along the street.

Summer weekends have the most foot-traffic along Dewey Lake and using an average of drivers during the off-season and weekdays would skew the results. “The season, other than the up-and-coming Memorial Day weekend, is going to be over,” said Nevins.

“The sooner we get this corrected the better we’ll all be,” said Lintner.

Neither Campbell nor Bolt could say when new speed limits will be determined but both said they hope to have work done by winter.