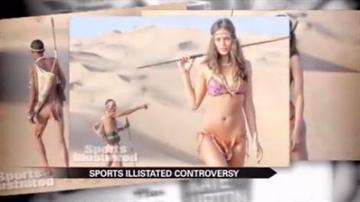 Sport Illustrated is under fire for their newest swimsuit edition.

The issue is known for its pictures with scantily clad women in international locations.

This year's photos show the models sharing air time with natives on all seven continents. Some are calling the pictures and online videos insensitive, claiming the magazine is using people of color as background or extras as part of the fashion.

"For me, the African picture was probably the most offensive because it played on some of the most old and stereotypical images," said Mark Lamont, a Columbia University professor. "It showed the African as primitive, as almost uncivilized."

Sports Illustrated gave ABC News a statement saying the issue has always been about showcasing beautiful women in exotic locations. Going to all seven continents to present the natural beauty of each setting and its people is the goal.