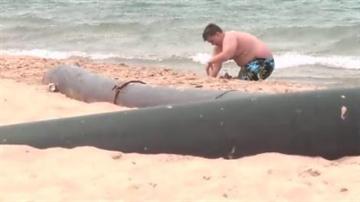 ST. JOSEPH, Mich. -- It's hard to miss the signs of dredging along the beach in st. Joe, Michigan. Crews began work at the end of May and the project is almost done. Although some visitors don’t know what the pipes are for, residents understand dredging is necessary but are ready to see the project complete.

Just feet from the pipes, beachgoers are lounging in the breeze.

"Well, we didn't know where to sit because they're so in our way,” said Arianna Osmar.

Kids can't seem to get enough of the month-long addition to the sand.

For others-it's more of a barrier.

"you try to decide if you want to be near the water or away from it, its dividing,” said Osmar.

A majority of people set up on the opposite side, closer to the water.

"Saw the pipe and wished we were away from it but we understand why it’s here and it’s needed,” said beachgoer Susan Lane.

As a lifelong resident Lane says while it may not be the best view, it is important to the local economy.

"For boaters and our waterways we defiantly need the dredging for the summer season. It needs to be done so for a few months I think we can put up with it,” said Lane.

The Saint Joseph Harbor Master says Lafarge has been able to get 7 or 8 big shipments in, but that number is below normal.

While it may be abnormal to stumble across these pipes in the sand, boaters and sunbathers are all hoping for a productive summer.

"We're hoping for a lot of warm days so we can come back here and we'll sit by the pipe if we have to,” said Lane.

The contractor says they should be done with the dredging project in the next couple of days.