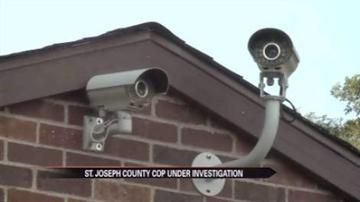 ST. JOSEPH COUNTY, Ind. -- St. Joseph County Police confirmed they are investigating one of their officers. He has been accused of assault.

The complaint alleges the officer committed acts while off duty that would, "constitute some type of battery."

ABC 57 talked one on one with the alleged victim who said she has never felt so helpless and afraid. "If a police came to my door right now I wouldn't know what to do, but I know I would not answer the door."

She said that she and her baby were alone in their Laurel Woods Apartment when Flanagan stopped by to check on her after an incident that police responded to at her home earlier that day.  She said that she invited Flanagan in, and that's when she said his whole demeanor changed.

"He came close to me, put his arm around me, he grabbed my butt several  times, over and over and kept telling me that it was going to be okay." The victim went on to explain, "Every time I tried to get away from him he pulled me back closer."

According to the statement, it was determined that the nature of the allegations warrants a formal criminal investigation so they contacted the Special Victim's Unit to investigate.

ABC 57 reached out to Flanagan, but have not heard back from him. The investigation is still in very early stages. Right now, this stands as a complaint, no charges have been filed against Flanagan.