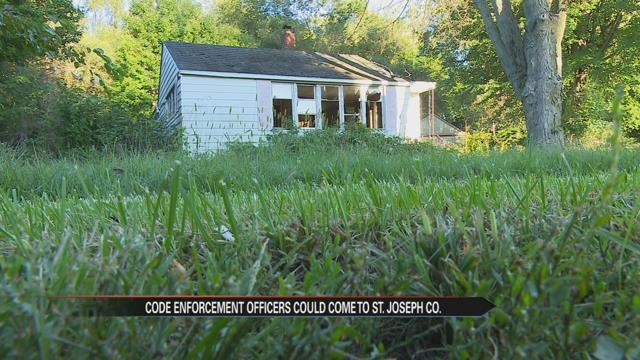 They’re now calling on county officials to step up.

The council is looking to crack down on those issues with a little help from the city of South Bend.

An abandoned home on the 55000 block of Pear Rd has had Beverage and neighbors concerned for years.

“They look at that and think the neighborhood is unsafe and that’s absolutely not the case in our neighborhood,” said neighbor Joy Wagnerowski.

Between the broken home and unkempt lawn, neighbors have been pretty vocal to their elected officials, saying ‘enough is enough.’

“I’d like to see it torn down, I don’t see how it has good bones so the leveling of it will be great,” said Beverage.

“I receive calls on a consistent basis from people who live outside the city limits with these types of complaints,” Rafael Morton, St. Joseph County council president. “I really feel pretty helpless when I have to tell people that at this point we do not have county code enforcement.”

But that could change; the council is panning on enlisting help from a department that deals with those problems often.

“We feel at this time the best option would be to basically contract with the city of South Bend and that makes sense because they already have a plan in place,” said Morton.

The city would run code enforcement for the county with the county’s building department and board of zoning appeals.

The goal is to also hire at least one inspector dedicated to the county, but financing it might be a challenge.

“It’s an ongoing process, ongoing discussions but from my perspective it’s something that’s needed and is way overdue,” said Morton.

Hiring one inspector would cost the county $75,000.

The council would like to see at least two on staff, but the fiscal cliff could put a halt to that plan.