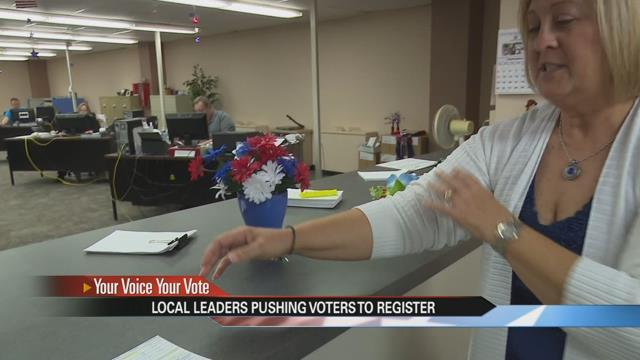 Leaders in St. Joseph County are organizing on National Voter Registration Day to make sure everyone hits the polls in November.

They’re also focusing their efforts on educating voters on their rights.

“If it’s a topic for debate and these presidential candidates are talking about it, that right there should let you know that this is the time you should be getting involved,” said Arielle Brandy, vice president of the African American Democratic Coalition.

With two presidential hopefuls vying for minority voters’ support, this party wants to make sure your votes and voices count.

“We have obviously a really great power right here to turn out and really utilize our voices and register to vote,” said Brandy.

This coalition is also doing outreach to voters that might’ve been behind bars at one point.

“We’ve really been digging into those people who are convicted felons and who are on home detention just getting them involved in the process too,” said Brandy. “Because a lot of them don’t know that in the state of Indiana you can still be registered to vote.”

The county’s board of voter registration says that right has been extended to ex-offenders for decades now.

“Anyone who is no longer incarcerated for any crime, whether it’s a felony or a misdemeanor is able to register to vote once they’re out,” said Frank Fotia, Republican member of the Board of Voter Registration.

They say all you need is identification and you’ll be able to sign up.

The coalition is pushing that information hard so come November there should be no excuses.

The deadline is October 11th.