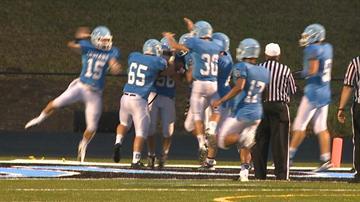 SOUTH BEND, Ind. – It was a night of firsts as the St. Joseph High School Indians beat the Elkhart Central Blue Blazers 35-0 in the first game ever held at the new school grounds and stadium on Friday night.

It was a game St. Joseph High players and fans had been looking forward to for year, finally having a field of their own to play on.

“We had practice on it, it was a great practice,” described senior Neal Dowling.  “We actually had 15-minutes after practice to look around and get used to it because when it comes game time it’s rolling, it’s a game, and we don’t have time to look around.”

Coaches actually had concerns that the players would be too distracted by the rush and excitement of playing on the new field for the first time.  But, many on the team said the atmosphere at the game was only going to inspire a victory.

Indeed, despite the heavy rain, thousands of fans came out and filled the stadium.  Alumni of all ages were in attendance to see the historic game on the school’s new home field.

“When I was at St. Joe we didn’t have a home field and so it always felt strange going to your opponent’s places and acting like it’s your home field,” explained Erin Moskwinski.  “It’s so nice to finally have a place that says St. Joe on it.”

The crowd roared as the St. Joseph Indians took the field for the first time, but the cheers were deafening in the first quarter when #56 Corey Kuminez of the Indians intercepted a pass and ran it in scoring the first touchdown ever on the new home field.