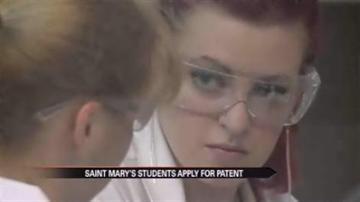 SOUTH BEND, Ind.--Some Saint Mary's College students may get more than a diploma for graduation. The group of scientists applied for a patent to test pharmaceutical drugs to determine whether they are legitimate or counterfeit.

"As a scientist. As a human being. I think it's amoral," said Professor Toni Barstis, Ph.D, chemistry department.

Counterfeit pharmaceuticals are a huge problem in many developing countries. A problem that the students at St. Mary's College want to help fix.

"These are things that these people absolutely need," said Mary Bevilacqua, bio-chemistry major. "And they're going to buy whether or not they know that there's a very strong chance what they're getting is counterfeit."

So Professor Barstis looked to her undergrad students for help and developed a Paper Analytical Device, called a "PAD," to screen drugs for counterfeits.

"You would take the pill you would crush it- you would put it into a little bit of solution that's included with the pad," said Bevilacqua.

Then you'd use an eye dropper and put the solution on the spots. The color changes would let you know if the tested pill is legitimate or fake.

But researchers  found some pills are too strong for this method and need a different solution. This is where the patent comes in: the special reagent inserted into a clear tube called a capillary. It's embedded inside the pad.

"Then bend it over where the capillary is or crush it and that releases it up into the paper and kinda of load the reagent into the paper right then and there," said Bevilacqua.

Think of a how a glow stick works- and that's how they can now test even the strongest drugs.

"This is an undergraduate institution. There's not a lot of history out there in the United States at least to have undergrads putting forth patents," said Barstis.

An experience that Bevilacqua says made her college career.

"There's obviously a 'that's cool' factor of it being our first patent, but there's also a 'holy crap we have no idea how to do this,'" said Bevilacqua.

But they did- with a little help from caffeine. Which Bevilacqua proudly tattooed on her arm- the chemical structure of course.