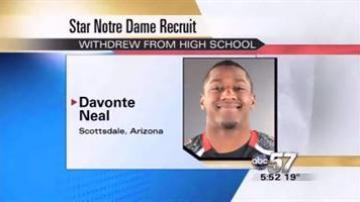 SCOTTSDALE, Ariz. -- A star player who signed with the Fighting Irish last week, has dropped out of his high school.

According to ESPN, Davonte Neal has withdrawn from his high school in Scottsdale, Arizona. The athletic director and the school's head football coach said he did it for "personal matters."

“There are a lot of things from our standpoint that we’re still getting information on, but he’s going to have his academics taken care of, which is the most important thing for us,” said Kelly.

Right now, no one's saying where Neal will finish out his senior year