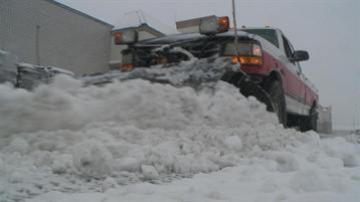 KNOX, Ind. -- Folks in Starke County were hit hard with another round of winter weather Tuesday. Conditions caused several dozen slide offs, which prompted police to caution folks from driving unless it's a necessity.

"This is nuts," Keaton said. "I didn't even know it was going to snow like this today."

He and other Starke County residents got more snowfall than they expected, right after what appeared to be a smooth transition into Spring.

"It melted, so I was pretty excited about that," Noelle Patrick, a Knox resident, said. "And then I come out of work, and it's like this. Not a fun day."

"It's too cold. They shouldn't be outside," Libby Flora, another Knox resident, said.

Road crews worked the streets in hopes of keeping them clear, but even that didn't stop the slideoffs.

"We've been waiting on this all day," Luke Smith, a plow driver, said.

"You just have to always try and be prepared," Kenny Pfost, with the Sheriff's Department, said. "We're ready for whatever Mother Nature throws at us."

But sometimes, she throws too much, which is why police are encouraging folks to take it extra slow.

"If you don't have to be out on the roads, please don't," Pfost said.