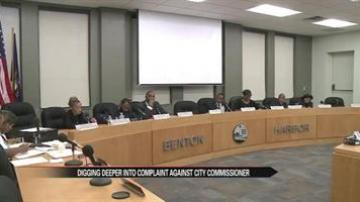 BERRIEN COUNTY, Mich. -- Benton Harbor Commissioner Trenton Bowens is under investigation by the state for not reporting donations or expenditures while campaigning for the city income tax which was on last month's ballot.

A formal complaint filed with the Berrien County Elections Committee against Commissioner Bowens prompted the investigation.

ABC57 sent emails to Bowens and made calls to the state to try to get the original complaint. We're still waiting to hear back.

The county elections administrator says Commissioner Bowens did not report any donations or expenditures while he campaigned for the city income tax last month.

She says the case has been turned over to the Attorney General's office, which is standard procedure.

Bowens declined an on camera interview, but he did release this statement.

"I've done nothing wrong. We received no donations for the City Income Tax, Everything that was spent was out of personal resources therefore the complaint filed has no substance."

One question that remains unanswered is who filed the complaint.

We contacted the Attorney General's office to find out more details of the investigation.