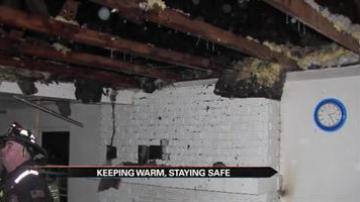 MISHAWAKA, Ind. -- As the temperatures drop, residents do what they can to stay warm. One family nearly lost their home last winter when an ember from their fireplace caught their house on fire.

"I had a fire going because it was cold out and the ember caught up into the attic and the old insulation from what I'm told is like kindling. It was just like poof - caught everything on fire," said Crystal Rans.

On January 20th Rans was home watching TV with her family by the fire until a St. Joseph County Police Officer knocked on her door. Her house was on fire.

"I ran back in to get my kids out and then stood out in the cold and watched my house burn down," said Rans.

"The older insulation from what I've been told is just like throwing gas on a fire. Just check your insulation, get new insulation, it's not expensive just change it," said Rans.

Rans had working smoke detectors at the time, but they didn't go off because the fire started outside the house.

She says it's important to get your chimneys swept and to make sure the insulation is in good condition.

"It could have been the difference between losing as much as we did and losing a few things," said Rans.

Penn Township firefighters say you should use only seasoned wood in your fireplace because it won't create as much smoke as green wood.

Firefighters also encourage residents to use the 3 foot rule.

Keep curtains and other combustibles at least three feet away from anything that gets hot.

Make sure your fire is completely out when you go to bed. There shouldn't be any glowing embers.

"We recommend that you put the fire out completely before you go to bed, not only could it possibly start a fire and you not know it, but it also puts out poisonous carbon monoxide gas which can fill the home and also render you unconscious and kill you in your sleep," said Brian Mayo, Fire Marshal with the Penn Township Fire Department.

Penn Township Fire Department is giving away free smoke detectors at Stations 13 and 14. They'll even install it for you if you need them to.