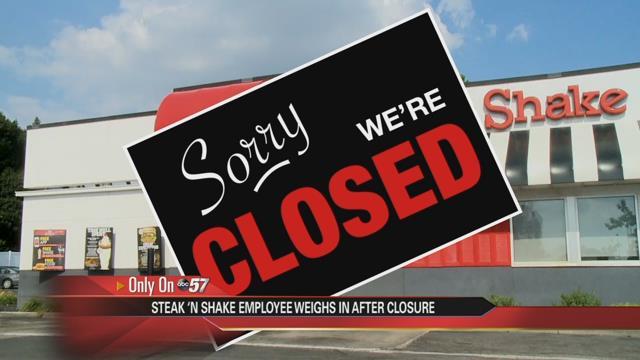 The Steak ‘n Shake on Ireland Road in South Bend was shut down last week for a third time in less than 2 years, due to health code violations.

On Monday, the St. Joseph County Department of Health forced the restaurant to be closed for another 9 days to clean up their act.

The Health Inspector saying it best when he said he feels bad for the employees because they are out of jobs.

“I like working here, I just think it should be run by different individuals. The management and communication is off. I don’t think all the employees that are there are meant to be there. They are not there for the right reasons. .Everybody should be on the same page.  And they’re not. It’s crazy,” said the employee.

The employee has worked at this location for almost two years.

In that span the restaurant has been shut down 3 separate times for violations.

From employees putting gloves on without washing their hands, to greasy residue left on counters and sinks.

Besides another six month probation period, the committee deciding that the restaurant should be closed until Wednesday, August 25, where they then, will receive a re-opening inspection.

Kevin Harrington is the Assistant Director of Food services for the St. Joseph County Health Department.

“They (the owners) were embarrassed .They do have it within order, it’s whether or not the employees can follow it that are actually there,” said Harrington.

For employees that work at the Steak ‘n Shake and depend on the money, that is unsettling news.

“The main job which is this one which all of my money comes, I can’t even utilize it because we are out of work because of a simple situation that could have been prevented,” said the employee.

Harrington says the next step if the restaurant continues to fail inspections is a court order, which he says nobody wants.