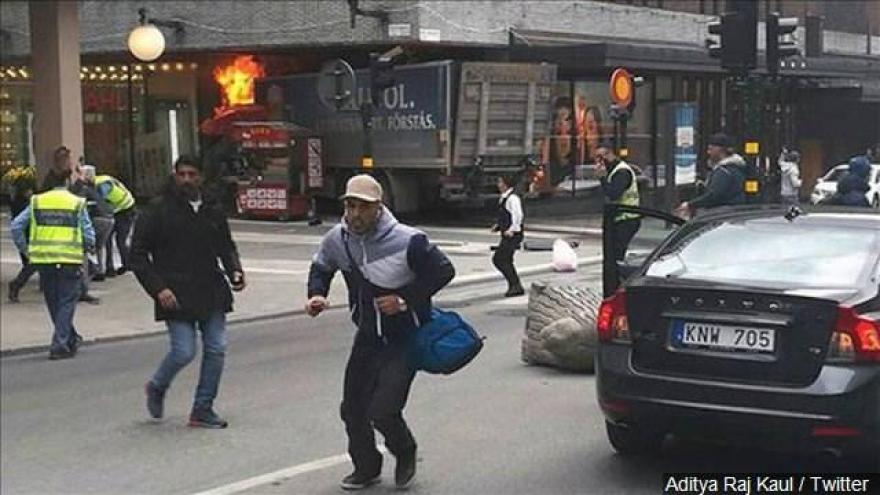 STOCKHOLM (CNN) -- A man arrested after a stolen truck plowed into pedestrians on a busy Stockholm street is being held on suspicion of terrorism offenses and is likely to be the driver of the vehicle, authorities in Sweden said Saturday.

The attack Friday in the heart of Sweden's capital left at least four people dead and injured a dozen more.

Nine of the injured -- eight adults and one child -- are still being treated in three different hospitals in the city, the Stockholm County Council said Saturday.

"It is likely that it is the driver of the van that has been arrested," police spokesman Mats Eriksson told CNN. "This however does not exclude the possibility of there being more arrests that will follow."

The explosives were in the form of a homemade bomb in a bag, SVT reported but did not properly detonate. The attacker apparently suffered burns of some kind caused by the explosives, SVT said.

Asked for confirmation by CNN, Eriksson said he was unaware of any information about explosives found in the stolen truck.

The prosecutor has until noon Tuesday to ask the court to detain the suspect, said Karin Rosander, spokeswoman for Sweden's prosecutor's office.

The Swedish Security Service said the attack happened just before 3 p.m. local time. People were seen fleeing the area in panic after what appeared to be the latest use of a vehicle as a weapon of terror in Europe.

Eyewitnesses reported seeing the beer truck speeding along Drottninggatan (Queen Street) before it crashed into the front of a department store. The company that owned it said it had been hijacked as it made a delivery nearby.

'We are not afraid'

The street remained cordoned off Saturday morning, but the truck had been removed overnight from the building where it was wedged. Heavily armed officers guarded the area and several police vans were present.

Flowers had been left by the cordon, and police consoled a crying man as he walked up with a bouquet.

Sweden's Deputy Prime Minister Isabella Lovin and Education Minister Gustaf Fridolin paid tribute to the victims of the attack as they too left flowers at the scene.

"This is unfortunately something we are seeing in many countries in the world, but we have to stand up for our open society," Lovin told reporters.

"I feel great pain for those family members who have received the worst message possible. This is my city, and it feels unreal that this has happened," she said. "We must do everything in our power to make sure this doesn't happen again."

Several fathers brought their children down to the barrier and explained gently what happened.

Habib Jlassi, a 29-year-old night bus driver who was there with his three-year-old daughter, told CNN it was important to come down to offer his blessings and pay tribute to those who lost their lives.

"I've come here to show that we are not afraid," said Jlassi, who lives in Stockholm and whose eyes looked red from crying. "We are stronger than them."

Around the corner, in a square outside Stockholm Concert Hall, a flower, fruit and vegetable market was being set up, as it would on any Saturday. Some people bought flowers there before walking over to leave them by the cordon.

Debris still littered the ground around the crash scene and workers in neon suits carried items to a waiting skip.

Police said Friday that the man taken into custody matched the description of a person of interest whose photo authorities had released earlier.

"Sweden has been attacked," Prime Minister Stefan Lofven told reporters. "Everything indicates this is a terror attack."

Lofven said the government was doing everything possible to help the security services. "We are thinking about the victims -- their families and friends -- and those who were injured," he said.

The Prime Minister returned to the capital from the west of the country, his spokesman Erik Nises told CNN.

"We will always do everything we can to protect Sweden, but we can't guarantee that it won't happen again," Lofven told reporters later Friday.

"If this is a terrorist attack, terrorists ... want us to not live our lives normally," he said. "But that is what we are going to do. So terrorists can never defeat Sweden. Never."

King Carl XVI Gustaf announced he had cut short his state visit to Brazil to return home immediately in the aftermath of the attack.

'He put his foot on the gas'

According to eyewitness Veronica Durango, the driver "put his foot on the gas and ran through the crowd."

"He came from Olof Palmes Street and drove down to Drottninggatan," Durango told CNN in a phone interview.

"It was like he was driving through paper. It's like it was nothing. I can't even believe how a person could do such a thing. And then he just kept on going. I was in shock."

The attack in Stockholm joins a growing pattern of vehicles being used to launch attacks on pedestrians.

Last month, a man rammed into crowds on Westminster Bridge in London, killing three people before stabbing a policeman to death outside Parliament. A fifth victim who was knocked off the bridge and into the River Thames below died after her life-support was switched off this week.

In July 2016, more than 80 people were killed and over 200 injured when a terrorist used a 20-ton truck to plow into crowds who had gathered in Nice to watch Bastille Day fireworks.

Last December, 12 people were killed and at least 48 people were wounded when a truck drove into a Christmas Market in Berlin.