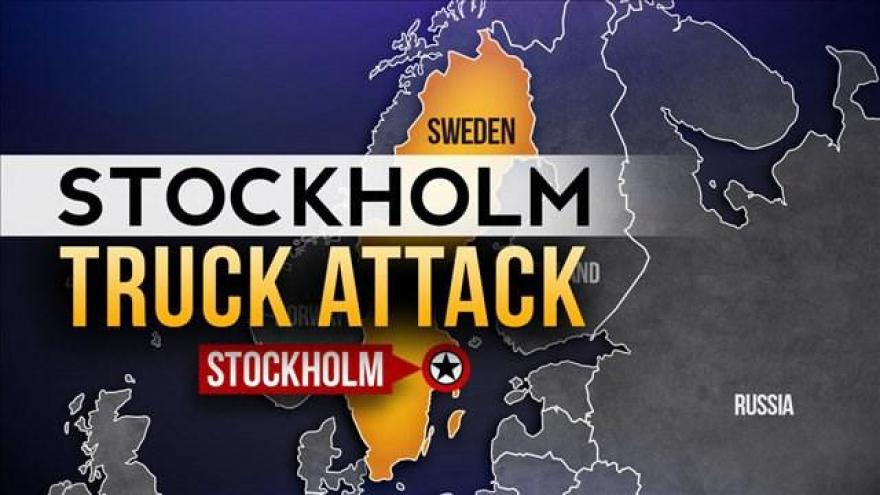 By Per Nyberg, Sarah Chiplin and Angela Dewan CNN

Police also identified the four victims' nationalities -- two were Swedish, one British and one Belgian, while the prosecutor's office said a second arrest had been made.

The first suspect, a 39-year-old man from the central Asian nation of Uzbekistan, was known to intelligence services when he was arrested on Friday.

"We know he has shown sympathies to extreme groups, among them ISIS. We won't comment any further on that," national police spokesman Jonas Hysing said.

The suspect had applied for residency in Sweden in 2014 but his application was rejected in December last year, another police spokesman, Jan Evensson, told reporters.

He was given four weeks to leave the country, and in February his case was handed to police to deport him.

Karin Rosander, spokeswoman for Sweden's prosecutors office, said that the second person arrested was "suspected of terror crimes through murder."

A beer truck plowed into a department store in the center of Sweden's capital on Friday, sending crowds running in a panic. In addition to the four killed, 15 people were injured, four of them critically, Stockholm County Council said earlier.

Sweden has stepped up its security, with approximately 100 police officers deployed from across the country to assist in Stockholm. National counter-terrorism, bomb and air assets are also providing support.

The incident comes on the heels of several similar attacks in Europe -- a man rammed his car into a crowd in London near Parliament in March, killing five people. In December, a large truck plowed into a Christmas market in Berlin, killing 12. And on France's Bastille Day last July, at least 85 people were killed when another large truck mowed down a crowd celebrating the day.

Swedish police said Saturday that they had found a "device" in the truck that they were investigating.

"Whether this was a classic bomb or some sort of flammable device is now a matter for our analysis," Swedish Police Chief Dan Eliasson said.

Sweden's public broadcaster SVT had reported that a bag of undetonated explosives was found inside the truck, which was stolen minutes before the attack as it made a delivery at a restaurant. The attacker apparently suffered burns caused by the explosives, which did not detonate properly, SVT said.

A manhunt was launched immediately after the attack. The suspect was detained Friday in Marsta, a town about 30 minutes' drive north of Stockholm near the city's main international airport.