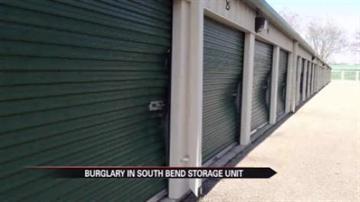 SOUTH BEND, Ind. -- The All Secure Storage facility on Burnett Drive was burglarized Saturday morning. Thousands of dollars worth of items were stolen from units.

Nicole Gryfik says she went to get one of her cars out of storage around noon and she was devastated by what she found: Rows of at least a hundred vandalized units, and the stereo system ripped out of her car.

She says what upsets her most is that no one from the storage company ever notified her.

Gryfik says that the police were not called until she got to the scene and called them herself.

The company website says that the facility is under surveillance 24 hours a day, but now, many are convinced that is not entirely true and are left trying to figure out where to go from here.

"We worked so hard for it, I feel so violated, so violated, I just want to cry. I've cried so many times today I can’t tell you, it makes me sick to my stomach," said Gryfik.

Insurance companies say that if you have homeowners insurance or renters insurance, the items you have in storage are also covered, but only up to a certain dollar amount.