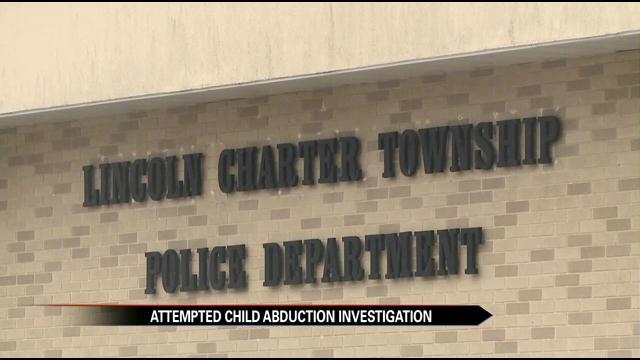 Around 7 p.m., police were called to the home of a 10-year-old child who attends Christ Lutheran Elementary School.

The child said he was walking home from school in the area of Cleveland Avenue and Redwood Drive when a red or silver vehicle pulled up next to him.

"He had been approached by a man in a red or silver car that had pulled over alongside the road and told the child that his sister had been injured in an accident and that his father had sent him to pick the child up and take him to the hospital,” said Chief Dan Sullivan of the Lincoln Charter Township Police Department.

The boy doesn't have a sister.

“We don't have any girls so right away my son knew that was not right. So he said, ‘I'm going to go check with my mom.' and he ran home,” said Brandi Roscoe.

Roscoe said she knew something was wrong when he came home.

"He's usually like let's play on the PS3 or minecraft or something like that but he came in the house and was very quiet and sat in our chair by our front window and looked out the window for a good hour and I was like 'Are you waiting for a friend to come over?' And he was like 'No.' So I asked him what was going on and he said he didn't want 'that man' to come back,” said Roscoe.

Roscoe says her son was terrified and now her children will never walk home from school again.

"I'm very upset I mean this is a quiet nice neighborhood, for a little child like that, to be totally freaked out and scared is a big deal to them too,” said Roscoe.

The driver of the vehicle was described as a white male in his 40s.
“Blondish brown hair, red and white striped shirt and a big nose apparently. He said like Squidward in Sponge Bob. I'm not sure that's an official description but it will help,” said Roscoe.