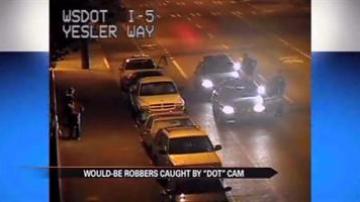 SEATTLE -- They were set up to capture traffic violators, but some street cameras in Seattle did caught something a little more.

The Department of Transportation spotted a couple of men peeking into car windows. And when one appeared to break a window, the DOT called police.

Officers should up a minutes and took the men into custody.