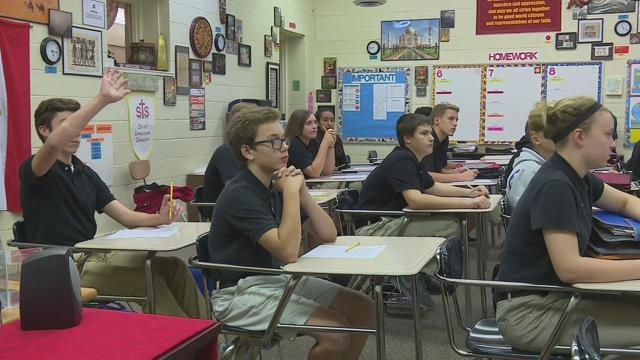 Election Day is less than two weeks away. Registered voters are scrambling to make the right decisions and some kids in Elkhart wish they could head to the polls too.

On Wednesday, lawyers with the State and the Elkhart City Bar Association presented to students, second through eighth grade, and they hope the lesson taught will have an impact on voter turnout, at least at some point in the future.

“Elections are just really interesting to me” says Janaye Acosta, an eighth grader.

“This really helped us learn why we need to vote” says Emily Tinervia, another eighth grader.

The hope is the democratic spirit of the two eighth graders carries on until they are old enough to vote.

“One of the big problems in our state has been a low voter turnout,” says Andrew Hicks, who Organized Indiana’s Kid Elections in Elkhart.

Andrew Hicks along with Indiana Kids Elections, a state wide program, organized the presentations at St. Thomas the Apostle.

He says the 30% voter turn in the 2014 general elections concerns him and that’s why he wants kids at St. Thomas to start thinking about the importance of voting now.

“This is the first one that they are really paying attention to and I think because it is such a controversial election as well that another reason they are paying attention,” says Jason Emmons, a Social Studies Teacher at St. Thomas the Apostle.

Jason Emmons teaches social studies at St. Thomas and says the best part about Wednesday's presentation was that the kids not only discussed the presidential race but also elections that hit closer to home like the gubernatorial and congressional races.

“This is not a reality show it’s an election and it’s important to talk about the different roles that the people on the ballot are for,’ says hicks.
On Wednesday Hicks and a few other attorneys saw hundreds of kids and many of them said this day will stick with them for a while.

“Even though we can’t vote it’s still giving us information for when we can vote we know what’s going on so we can understand it better when we actually have the chance to vote,” says Aidan Fletcher, an 8th Grader.