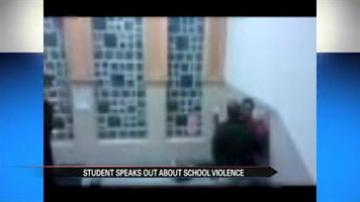 SOUTH BEND, Ind. -- A few weeks ago a video surfaced of an incident between a student and a teacher at John Adams High School. A local student who witnessed the entire incident, even the parts not caught on camera, is speaking out about what she says really happened.

The video showed a teacher and a student tumbling down the stairs after a physical altercation.

Sidea Williams, a junior at John Adams High School, says the video doesn't show what happened before the fight. She says the teacher was initially trying to break up a fight between two students - and the teacher ended up in the middle of it.

Williams saw the fight in person.

She says the grainy cell phone video doesn't tell the whole story and wants to stand up for her teacher.

"He's very active in the school. I would stick up for him because in a way I felt they was bashing his name because he wouldn't provoke a student. If anything he would help a student," said Williams.

As the end of the school year draws approaches, Williams says fights are becoming more and more frequent.

She says teachers, like the one in the video, are stepping in to stop the student-on-student aggression.

That's why she's stepping up and risking the repercussions from her peers.

"Cause usually when people stand up and speak for what's right they're labeled as an opp. And an opp is like a snitch, but I'm like that one person that will stand out," said Williams.

The school district offers a program for students who are feeling frustrated or aggressive. One of the most successful programs is called the "Take Ten" program. It's based at the Robinson Community Learning Center.

"Our goal if we can achieve it, is to evoke climate change in the building and really have everyone look at conflict and violence differently then we looked at it before we got there," said Ellen Kyes, the program director of Take Ten.

The program sends local college students into the classroom to teach kids to "Talk it out, walk it out, or wait it out."

Williams says her school's freshmen need it the most.

"Focus more on the freshmen at Adams because the last year or two the freshman have been coming in have been the main ones causing the problems and the fights and stuff like that," said Williams.

At Adams, the Take Ten program does just that.

"The group of peer mentors we work with, the 10-12 or maybe a few more upperclassmen and then they work with freshman they're assigned to. And so over time each group of freshmen will have been exposed to it," said Kyes.

She says that's the long-term plan for the program.