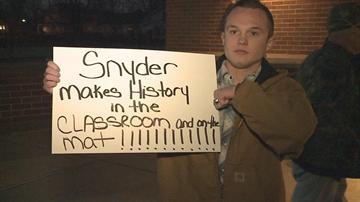 Snyder was put on leave in December after six-members of the wrestling team were accused of sexually assaulting a team mate two-years ago.  The accused students have been charged, prosecutors allege that the students forcibly sodomized their teammate.  But, Snyder has only been put on administrative leave.  People from across the community jumped to Snyder's defense as soon as the news broke, saying that he had no knowledge of the assault and would have taken action if he did.

"I wrestled for a little bit and I have a lot of friends on the wrestling team and they just say it's not the same without him," said Mishawaka High School Junior Justin Bowerman, explaining why he came to support Snyder.  "School just doesn't feel right without him."

Before Tuesday's meeting, dozens of protesters held signs and led chants in support of Snyder outside of Beiger Elementary.  The School City of Mishawaka board wouldn't allow signs or protests inside the meeting.  Once it began, supporters took to the podium during the public comment phase to speak their feelings about Snyder being put on leave.

Board members made it clear that they could not comment on Snyder's case during the meeting.  But, organizers of the rally for Snyder said they're main motivation was to let board members know how they felt about his administrative leave.

After the meeting concluded, School City of Mishawaka Superintendent Dr. Terry Barker said that he and other board members were moved, even "heart broken" at the public comments.  He said they would take them into consideration, but will not make any decisions about Snyder's future with the district until a formal investigation into the sexual assault accusations is over.