Students back in class at Ohio State; investigators search for knife attack motive 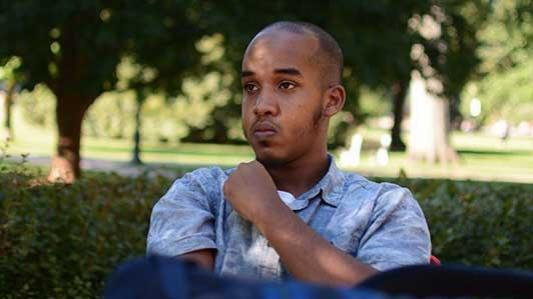 Abdul Razak Ali Artan, a student who recently transferred there, had written in a Facebook post he had grown "sick and tired" of seeing fellow Muslims "killed and tortured," according to federal law enforcement officials.

Authorities are now looking into whether the attack was terrorism but said it would take time to determine a motive.

In a Facebook post shortly before the rampage, the Somali immigrant urged America "to stop interfering with other countries, especially the Muslim Ummah," a term for Muslim people at large.

"By Allah, we will not let you sleep unless you give peace to the Muslims," he wrote. "You will not celebrate or enjoy any holiday."

Artan rammed his car into a group of people on the Columbus campus and then got out and charged at passersby with a knife.

Ohio State University Police Officer Alan Horujko shot Artan after he failed to obey orders to stop -- killing him and stopping the attack.

What we know about the attacker

In August, Ohio State's student-run newspaper profiled Artan as part of its "Humans of Ohio State" series. He had just transferred from Columbus State and talked about his struggles to find a place to pray in peace on the large campus.

"I wanted to pray in the open, but I was scared with everything going on in the media," he told the paper.

The student reporter who interviewed him described a soft-spoken young man who was fearful of his new surroundings.

"He was very scared to go out to pray," Kevin Stankiewicz told The Lantern. "On the Oval, on the first day, he didn't know what the climate was like here. Paraphrasing, but he specifically mentioned he was afraid someone might shoot him. He just didn't know if anyone would be intimidated."

Stankiewicz said Artan came across as genuine and nice.

"He did not seem angry," Stankiewicz said.

"I don't know what and where and when and why and how, but something happened between Aug. 23 and now."

Artan left his native Somalia with his family in 2007. They headed to Pakistan, where they were admitted as refugees as part of a minority sect of Somalis, a senior administration official told CNN. Seven members of the family applied for refugee status in the United States and were admitted in 2014. Today, they are all legal permanent residents and green card holders.

David Woodyard, CEO of Catholic Charities of Dallas, told CNN that Artan and his family came to his organization in June of 2014 after being vetted by the State Department. He said the family consisted of a single mom and seven kids -- three boys and four girls.

Catholic Charities helped the family assimilate to life in the US by helping them find a place to live as well as providing assistance with language and job skills. The family decided to move after just 23 days for unknown reasons, Woodyard said. Catholic Charities provided no assistance in the move.

Woodyard said there was nothing in the family's file to indicate that there had been any trouble while they were in Dallas and that he had not been able to find anyone at the organization who had a detailed memory of them.

A community member, who described Artan as a good kid, said the attacker's family sounded shocked during a conversation.

Artan said reports of human rights abuses in Myanmar pushed him to a "boiling point." The United States, which suspended its last sanctions against the former military dictatorship this year, said it had expressed concerns about the treatment of Myanmar's Rohingya Muslims.

"I can't take it anymore," he said in the post.

At 9:52 a.m. Monday, Artan drove over a curb and struck people near Watts Hall.

Student Logan Chapman, who was nearby at the time, said everyone thought it was an accident.

"So everyone was checking to make sure that the people who were hit were OK," he told CNN's "New Day." "As soon as everything had settled down, he got out of the car and started slashing people closest to the car with the knife."

Jacob Bower, a 20-year-old student, said he saw the attacker outside between the Koffolt Laboratories and Watts Hall.

"He pulled a large knife and started chasing people around, trying to attack them," Bower told CNN, adding that he did not see anyone get stabbed.

Throughout the attack, the assailant didn't yell or say anything, Bower said.

"He was completely silent, which was very creepy. Not even when he was shot," the student said.

"The cop that subdued the guy with the knife saved so many lives today."

Investigators used surveillance camera footage to track Artan's car before he arrived on campus, University Police Chief Craig Stone said. By tracing his movements, investigators were able to conclude he was alone in the vehicle and acted alone.

Gov. John Kasich praised the response, saying it showed "how much practice, how much training, how much expertise, how much coordination" existed among local law enforcement agencies.

"We are a strong, tough, resilient community," he said.

Ohio State President Dr. Michael V. Drake and others credited the school's active shooter training and the campus alert system for helping the community maintain order while the scene was secured. Ohio State's Columbus campus is one of the largest in the United States. Nearly 60,000 registered students attend classes on the sprawling urban campus.

At 9:55 a.m., three minutes after Horujko's first call, the school sent out a campus alert reporting an active shooter incident.

Some students piled chairs against a door to block him from getting in as they awaited word on the attacker's movements.

In 911 calls to police, several students described the chaotic scene.

"I think this is some type of terrorist attack," said one caller, according to CNN affiliate WCMH. "Because the guy ran a car through a crowd of students. The guy did it purposefully."

About 90 minutes after the first call came in, the lockdown was lifted, Drake said.

Students had just returned to class Monday after Thanksgiving break -- and after the OSU football team's big win Saturday over the school's biggest rival, the University of Michigan.

Overall, it was "one of those days you're grateful for good training and great people across the board," Columbus Mayor Andrew Ginther said.

In a news conference Monday, Drake cautioned against jumping to conclusions when asked if the incident was terror-related or had anything to do with Ohio's Somali community, the second-largest in the country.

"We certainly don't have any evidence that would say that's the case," Drake said.

"What we want to do is really unify together and support each other; do our best to support those who were injured in their recovery, and then allow the investigation to take place."

Louann Carnahan, who lived next door to Artan, said she knew him and his family quite well and spoke to them every day. She described him as being very pleasant.

"I never expected any kind of behavior like that from him," she told CNN. "I'm still beside myself that he was even capable of the acts that he did."

There were no visible changes in his behavior in the days leading up to the attack, she said.