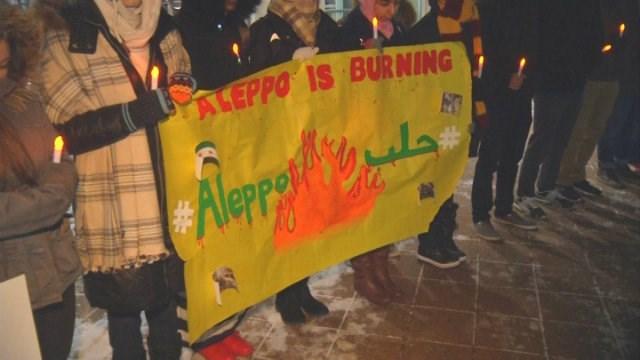 Flint, Michigan -- Secretary of State John Kerry is accusing the Syrian government of massacre as thousands evacuate the city of Aleppo, the last rebel stronghold in that country's civil war.

Thursday, dozens of students at U of M-Flint held a vigil for the city.

It was an especially personal event for the organizer, Jenna Zineddin.

Zineddin is from Aleppo, which has been pounded by the Syrian army with help from the Russians and Iranians as they try to smash the last rebel stronghold.

Zineddin said she wants the vigil to bring attention to what's happening and hopes the President or members of Congress take action.

"For everyone to just sit and watch this historic city crumble and fall into pieces... it's something that just...it's disgraceful," she said.

Zineddin said she still has friends in the city and they live in constant fear.

"They say that as long as you're not going outside, you're fine, but at any moment a bomb can hit their house and the house can just fall on top of them," she said.

It's believed that as many as 30,000 people have died in Aleppo during the past few years of fighting.