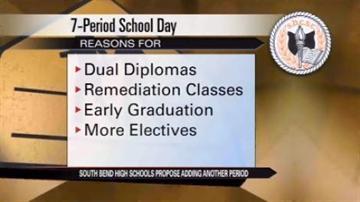 SOUTH BEND, Ind. -- South Bend Schools want to move to a seven period school day for high school students. While some are against the move, students say they’re all for it.

The South Bend Community School Board will vote on the issue Tuesday. Currently Clay and Riley high schools have six class periods. Those would be cut short to add a seventh period.

"At this age I'm supposed to be getting my license, getting a job and also doing summer fly but because of the classes and stuff I have to put some of that other stuff aside so I can get my priorities figured out and graduate,” said Simone Swanson, Clay sophomore.

Swanson is one of the many students who will be on hand for Tuesday night's meeting to support the 7 period schedule change.

"If we do get this, then people who are in the magnet and trying to get academic honors will be able to do that without having to take summer school,” said Swanson.

Swanson says the proposed schedule change would make it easier to earn a dual diploma – an academic honors diploma and a technical diploma.

Right now those students are forced to take summer school and sometimes that's not even enough.

“I was taking summer school classes to be able to graduate with both of the diplomas and be in the academic classes and we couldn't do it because of art class,” said Taylor Willekens, Adams senior.

A seventh period would also allow for remediation classes to give students who fail a course a chance to retake it and graduate on time.

Other students could graduate early and even explore more elective options.

Some say that comes at a cost.

If the proposal is passed, classes will be cut from 56 minutes to 50 minutes.

Schools would eliminate the "success period" for those needing extra help and teachers would be required to take on an extra class.

But for students like Willekens and Swanson, there's only one argument that matters.

"For me, the most important part is that diploma. Because if were to graduate with an academic diploma and a magnet diploma, colleges will look at me and say she's really trying to achieve and get good grades and get into college and do something with her life,” said Swanson.