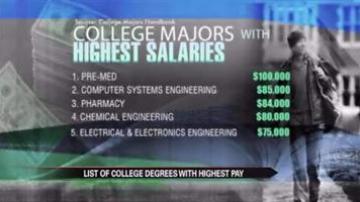 College students who have not chose a major yet might want to look at math and science.

A new study lists the majors that have the highest paychecks.

The study lists math and science related fields as having the highest average salaries for people right out of college.

It is not all about the money.

The same went for many with liberal arts degrees.