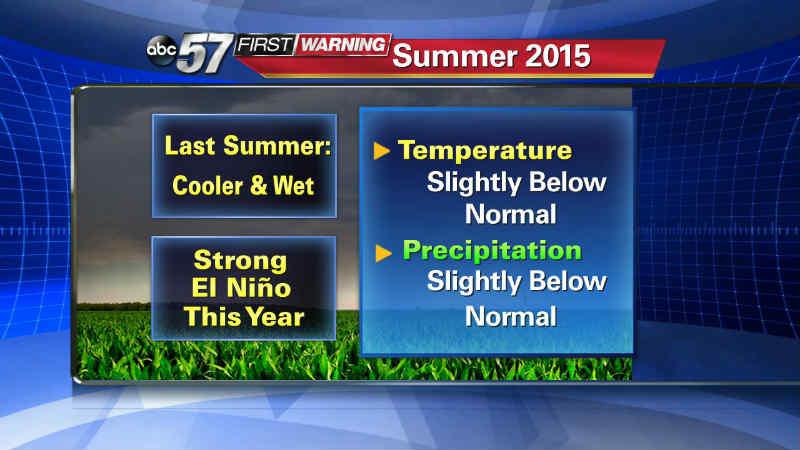 SOUTH BEND, Ind. – June 1st is not only the start of a new month, but is also the beginning of a three-month period known as meteorological summer.  With last summer only seeing two days of 90° heat and nearly two inches above the normal rainfall, will this summer mimic the cooler and wetter one that preceded it?

The answer, believe it or not, lives in the eastern Pacific Ocean.  This year warmer waters have shifted eastward, closer and closer to the South American coastline.  When this occurs, scientists call this an El Niño.  When it is considered an El Niño year, it affects parts of the United States differently.  Under a strong El Niño, like this year's, California can expect warmer than normal temperatures, the southern Plains and the Gulf Coast can expect more rainfall than normal (which has been evident for the past couple of weeks especially in the areas affected by the flooding in Texas), but what does this mean for Michiana?  Typically during an El Niño year, Michiana can expect slightly drier and cooler conditions over the course of the summer months.

Treading back to last summer, out of the three months that we should see at least 9 days with 90° heat, we only saw 2, but we saw two more inches of rainfall than normal.  When comparing the summer 2015 outlook to the cooler and wetter 2014, we should be near the average temperature of 2014, but not quite as rainy as last year.

For your daily forecast, don't forget to check out the ABC-57 First Warning Neighborhood Weather page for the latest updates to your forecast.