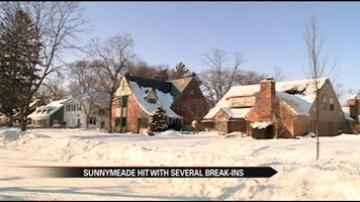 SOUTH BEND, Ind. -- ABC 57 has a crime watch alert for South Bend's Sunnymede neighborhood.  Several robberies have been reported, the most recent one on Jacob Street Tuesday night.

"It’s apparently somebody who’s keeping an eye on us and can see the comings and goings," says Debra Gaul, a member of the Sunnymede Neighborhood Association.

She says the group's biggest concern is that one person, or the same group of people, might be responsible for all of this crime.

They believe a pattern is starting to emerge.

"He mainly hits around dusk or early evening, and mainly breaks into side doors or back doors, and he’s just looking for jewelry, flatware and money," says Gaul.