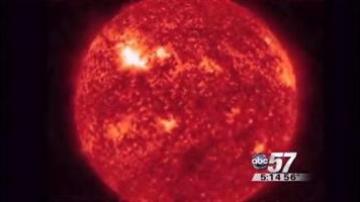 The sun’s surface has had an increase in solar flares, but according to NASA there's nothing to worry about.

Sunday, one of the flares dumped solar particles and magnetic fields into the earth's atmosphere.

Tuesday, the sun erupted with its second-largest flare. NASA said that one triggered a temporary radio blackout on the sunlit side of Earth.

Scientists predict it could cause more problems Thursday.