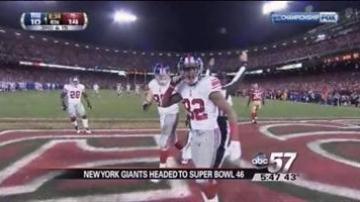 The teams have been decided and the NFL will soon have its new Super Bowl champion.

The New England Patriots and the New York Giants are headed to Indy for the league's biggest game of the season.

Eli Manning and the Giants went head to head with the San Francisco 49ers for the NFC Championship. The teams went into overtime tied at 17, but a field goal gave New York the win 20-17.

They will face the new AFC Champions, the New England Patriots. The game came right down to the final seconds, but a missed field goal by the Baltimore guaranteed a victory for Tom Brady and the Pats with a final score of 23-20.

Super Bowl XLVI will be a rematch of Super Bowl XLII. In 2008 the Giants beat the Patriots 17-14.

The Patriots and the Giants will take the field at Lucas Oil Stadium February 5th. Kick-off is set for 6:30.